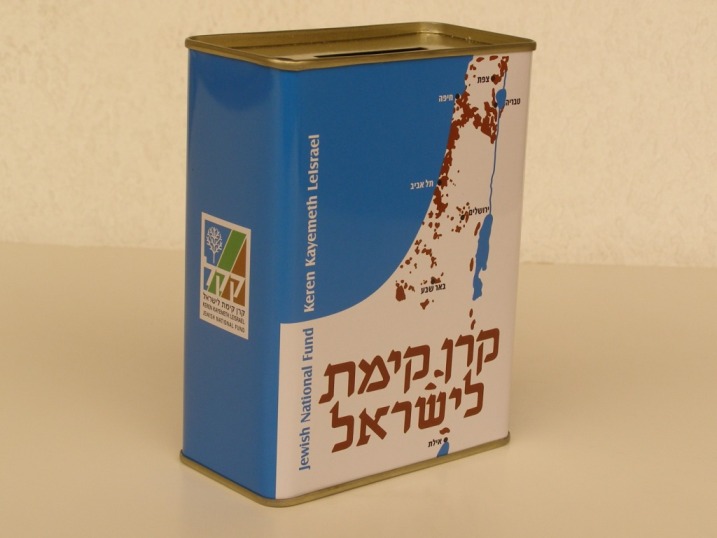 The little blue box. The JNF pushka that made a bold promise in greens and blues of planting, of settling, the box that rattled with the dream of permanence, of forever. The collection box that gave so many of us hope, and tinted our optimism with the lush assurance of sustenance in the Jewish State. When I think back on my childhood, my time in school and at camp, I can clearly see that tzedakah box, resting sturdily on almost every nearby shelf, dangling just out of reach in my periphery.
Every year for Tu BiSvhat, we would celebrate the birthday of the trees with a small donation to the JNF, the small symbolic motion of placing a coin, perhaps just a penny, into the iconic square blue box that held onto and protected our future. With that donation, we were marking our intention, and our hope to build something permanent in the land of Israel, honoring the dream of returning, of settling.

This year, as Tu BiShvat draws closer, I have been thinking, somewhat ironically, about uprooting, about all of the impermanence of our particular political moment. In the last several months, the Israeli government has escalated its policies against the community of African Asylum seekers, threatening mass deportation, incarceration, and forced return to increasingly dangerous conditions outside of Israel. Most recently, the Israeli government has offered a financial incentive of $9,000 to anybody who aids in the deportation of an asylum seeker.

On November 19, 2017, the Israeli government announced its intentions to begin deporting tens of thousands of Sudanese and Eritrean asylum seekers to Rwanda. There are approximately 38,000 Eritrean and Sudanese migrants living in Israel, and nearly 5,000 refugee children who were born in the State. These numbers do not include the 970 residents of Holot Detention Center, or the 450 Africans currently being detained at Saharonim Prison in the Negev.
According to the Hotline for Refugees and Migrants, an Israeli non-profit that works to defend the rights of migrants and refugees and combat human trafficking, of the 13,764 asylum applications that were submitted before July 2017, only ten applicants were granted refugee status. Today, 7,282 asylum applications are still pending decision and final approval.
I remember quite clearly that the JNF tzedakah box didn’t have borders, just a simple, rough outline of the whole land of Israel. A rough border, whose insides were speckled with green freckles to indicate where the JNF had its forests, where we had laid down roots. While I find the JNF map troubling for many reasons, there remains something hopeful about the openness that this map suggests. I have always read this border of sorts as an invitation, a reminder that this was the land of never again, this was the land where we could be safe, where anybody who sought refuge could be safe.
In Israel, we celebrate Tu BiShvat by planting trees. We celebrate the environment by putting down roots in the earth, by cultivating growth, nourishing persistence, and fostering sustenance. This year, we must think carefully about Tu BiShvat’s call. We must think about all of those in our sightlines who are being prevented from planting their roots, the ones who are being denied the most essential human experience of building something permanent, of building something that is forever.
We must also honor the Jewish quality of this holiday, and remember that the charge of ‘never again’ can never be selectively applied. If we care about the character of the state of Israel, if we care about our integrity as Jews, we must extend an invitation, we must allow those seeking refuge to find a home here, too.