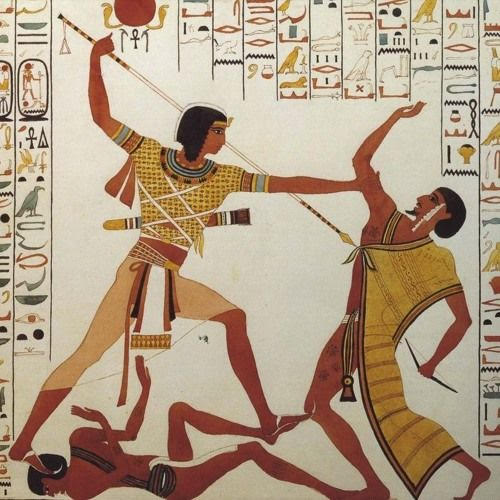 [This is the second of a series of posts on nonviolence in Exodus. The first one, by Aron Wander, is here.]

This article by Eli Ungar-Sargon is an adaptation of a drash given to the Shtibl community over Zoom on January 9, 2021.

With the book of Exodus, a new hero bursts onto the narrative stage of the Bible. From the moment of his birth, Moses is placed on both sides of the political and social boundaries that separate Egyptian from Hebrew, but it is his approach to violence that really sets up the rest of the Biblical narrative and his fraught relationship with the God.

And it was in those days that Moses grew and he went out to his brothers and saw their suffering and he saw an Egyptian man beating one of his Hebrew brothers. And he turned this way and that and saw that no one was around and he struck down the Egyptian and hid him in the sand.

This is the first inkling that we get about who Moses is and three elements stand out. First, he has a strong sense of identification with his Hebrew brethren. Second, he believes in the power of lethal violence to address Egyptian injustice. Third, he seems to think that this sort of extrajudicial violence needs to happen in secret. This last idea is immediately tested in his next outing.

And he went out on the second day and there were two Hebrews fighting and he said to the guilty party, “Why are you beating your fellow?” And the man replied “Who made you the chief and judge over us? Are you going to kill me now the way you killed the Egyptian?” And Moses was scared and thought “Indeed the matter is known!”

Again, we see Moses’ identification with the Hebrews, but we also see a shift in behavior. Whereas with the inter-ethnic conflict outlined in his previous outing, he felt comfortable using violence to address injustice without uttering a word, here he tries to persuade his fellow Hebrews with argument. But his gambit fails miserably as the Hebrew calls him out in a stinging rebuke. I know who you are! What are you going to do, kill me too? So Moses gets scared that his secret is out and he flees the country, recognizing that to resolve injustice nonviolently, you need the consent of the parties involved. In other words, persuasion alone is insufficient. To play this game, you also need authority.

So Moses goes into exile, settling in Midyan where he marries, and has children. Some time passes and he has his famous first encounter with the Divine at the burning bush. And at this point in the story it seems clear that the reason Moses is chosen has not a little to do with his violent past. In other words, the chronology of the narrative implies that God chooses Moses, because he has demonstrated a unique combination of ethnic loyalty and a willingness to use violence to address Egyptian injustice. And these two character traits make him perfect to execute the plan for the Exodus.

And I will stretch out my hand and strike down Egypt with all of my wonders that I will visit upon them and afterwards, I will send you out.

The problem for God, however, is that Moses is now a different man. At the burning bush, he objects to being chosen for the mission, first on the grounds that he has no authority among the Hebrews, which God solves in short order by giving him a series of magic tricks to perform. But then Moses objects on the grounds that he lacks skill in communication. Even with the magic tricks, he feels that whatever person God chooses to lead the Hebrews out of Egypt needs to be a skilled communicator-not only for dealing with the Hebrews, but also for dealing with Pharaoh. The Moses of the two outings where violence is the preferred strategy for Egyptian injustice, while persuasion is the preferred strategy for Hebrew injustice is no more.

When Moses begs for God to choose someone else, God becomes angry and tells him to bring his brother Aaron along to help, but then he gets even angrier in one of the most mysterious passages in the whole Bible. Moses is on his way back to Egypt to fulfill his divine mission when God tries to kill him.

And it was on the way in the inn where God met him and sought to kill him. And Zipporah took a flint and cut the foreskin of her son and touched it to his feet and said “For you are a bridegroom of blood to me.

I like to remind people whenever I get the chance that according to this passage, Moses is the first Jewish father that we know of who refused to circumcise his son and in his refusal, he seems to be indicating that even more minor forms of violence than homicide are now no longer part of his repertoire. This refusal ignites a Divine wrath that is only quenched by his wife’s violence against their child.

You know the rest of the story. The magic tricks work and Moses is finally taken seriously by his fellow Hebrews, but when he finally does confront Pharaoh with Aaron, they deviate from God’s explicit plan. At the burning bush, God had told Moses to threaten Pharaoh, but what Moses and Aaron actually end up doing is very different.

And they said, “The God of the Hebrews has called upon us. Please let us walk a distance of three days in the desert so that we can sacrifice to God our Lord, lest he strike us with disease or with the sword.”

Far from a demand and a threat, Moses and Aaron ask politely and refocus Pharaoh’s attention on their fears of what this violent deity might do to them, if he refuses to acquiesce.

The moral arc of Moses’ character should serve as an inspiration to us all. There is a place for physical force in responding to injustice, but to quote the Detroiter Rebbe Marshall Rosenberg, we need to distinguish between the protective use of force and the punitive use of force. The former is a morally justifiable form of violence for human beings in extraordinary circumstances. The latter is best left to the gods. And it’s all too easy for us humans to think that we are engaging in one, when in reality we are engaging in the other. May we have the wisdom to recognize the difference as our nation and the world navigates the stormy waters of injustice.

Eli Ungar-Sargon is an independent filmmaker based in Los Angeles. He is the co-host of the Four Cubits podcast.