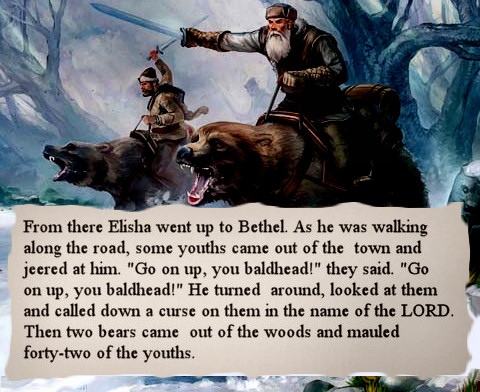 Humor site Cracked has a hilarious list of the 9 Most Badass Bible Verses. They’re not so much central to my religious life (or the way I understand how we live Torah, for that matter), but I laughed. Here’s #8 (the verse is above):

We’ve all been there. You’re walking along, minding your own business, when a gang of cocky, young bastards start hurling abuse at you. Most of us would just keep walking, or maybe, yell some insults back or flip them the bird. Elisha (commonly regarded as the Luke Skywalker to the Prophet Elijah’s Obi-Wan Kenobi), however, decides to take it one step further. Invoking the name of God, he summons motherfucking bears to come and claw the shit out of them.
Christians are constantly asking for prayer in schools to help get today’s kids in line, but we beg to differ. We need bears in schools. If every teacher had the power to summon a pair of child-maiming grizzly avengers, you can bet that schoolchildren nowadays would be the most well-behaved, polite children, ever. It’s a simple choice: listen to the biology lesson, or get first-hand knowledge of the digestive system of Ursus horribilis.
It should be pointed out that even after his death, Elisha continued to kick ass. II Kings 13:20-21 tells us that when a dead body was thrown into his tomb and touched Elisha’s bones, it sprang back to life. It’s unknown whether Elisha had this power in life, as well as death, but we like to think he did and that he had the habit of killing his victims with bears, resurrecting them, and then promptly re-summoning the bears to kill them, again. He’d just repeat the whole thing over and over until he got bored.

It should also be noted there’s another great Star Wars reference in #5, where Korah gets swallowed by the earth.
Full story.

11 thoughts on “Most Badass Bible Verses”