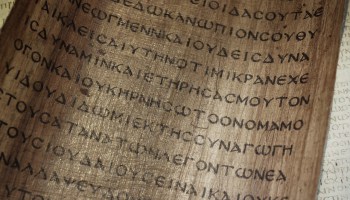 Mourning the 8th of Tevet, the Day the Torah was Translated into Greek

We just finished the 8th of Tevet, a day, which, though insignificant on today’s Jewish calendar, was marked by the Sages (Chazal) as a fast day because “On the 8th of Tevet, the Torah was written in Greek in the days of Ptolemy the King, and darkness came to the world for three days” — בח’ בטבת נכתבה התורה יונית בימי תלמי המלך והחושך בא לעולם שלשת ימים (Megillat Ta’anit, last section).
This is strange. Why should we be upset that the Torah was translated into the language of the largest, most powerful empire in the world, a leading language of literature, philosophy, and ideas, the language of the state governing the Jewish people at the time? How could the Jewish people reasonably fulfill Isaiah’s charge to be an אור גויים/”Light to the nations”, ie, to contribute meaning, insight, and inspiration to the world, if our record of meaning, insight, inspiration, and revelation is unavailable to them? Why does the apparent success of contributing light to the world cause darkness to envelope the world for three days?
A midrash elsewhere (Tanchuma VaYera 5) imagines Moshe so excited by revelation of Torah into writing that he asks God to render the Oral Torah (as exemplified by the Mishna) into writing, as well:

“Rabbi Yehuda the son of Shalom said: Moshe wanted the Mishna, too, to be in writing, but the Holy Blessed One foresaw that in the future, nations would translate the Torah and read it in Greek, and then they would claim: ‘We, too, are Israelites’. Hence the Holy Blessed One said to Moshe: ‘I shall write for him my multiple Torot’ (Hos. 8:12), and if so, ‘They will be considered as a stranger’ (ibid.).

These two texts challenge us to pay close attention to the power dynamics involved in a hegemonic body adopting cultural products of a subordinate group. Sometimes erasure comes through restricting the minority practice of its own culture, as in Antiochus’s later persecution, which we marked on Chanukah. But sometimes erasure comes through cultural appropriation, depending on a subordinate group to create culture, and then taking it and turning it from culture to artifact, from lifeline to epitaph. This is one of the many ways in which the same mechanical act can mean one thing or its opposite. When you embrace a minority group’s cultural output, are you elevating and strengthening that group, or undermining and erasing it? It depends on intentions, but not only intentions. Even if you are convinced that your intentions are positive, what are the consequences? What are the power dynamics? Who has control where? Who’s making or losing money or the ability to continue to produce?

These three days of darkness invite us as Jews to scrutinize cultural appropriation, power, and respect. How do we interact with Christian hegemony in America and globally in contributing Judaism to the world in a way that continues to build our strength and resources, our light to shine? When are Gentiles who embrace Judaism and Jewish culture our dear and cherished friends and when are they wolves in sheeps’ clothing? And, crucially, to the great extent that they have erased us/swallowed us into whiteness, which is to say white supremacy — a process to which, on the whole, we have been all too accommodating — how do these days of mourning cultural appropriation call us to attention to the deadly cultural appropriation of America’s core oppressed groups, Native Americans/First Nations and African Americans/Black people? When you, if you are not they, embrace their cultural output, do you do so in an affirming, life-sustaining way, or in a suffocating, stealing way? Are you extending the light of the producers of the culture or hijacking that light for yourself?

For more on this, see Rav Yitzchok Hutner’s Pachad Yitzchak, Chanukah volume, #6, which first directed my attention to these midrashim.

One thought on “Mourning the 8th of Tevet, the Day the Torah was Translated into Greek”