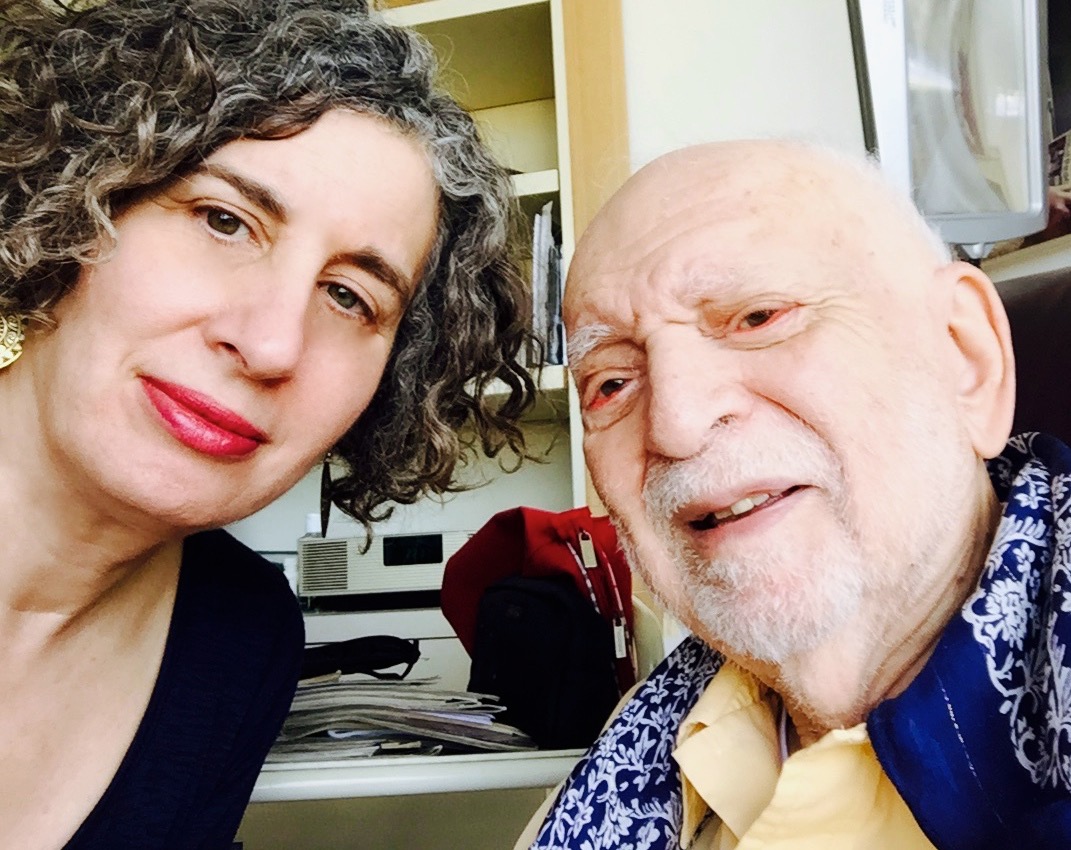 April 18, 2017May 4, 2018 by alizabecker
Jessie Zel Lurie began his interview with Aliza Becker for the American Jewish Peace Archive with these words: “I am 101 years old. I still write a column for The Jewish Journal of South Florida. We next column will be out on Wednesday.” Indeed, Lurie led a long and active life until his passing at age 103 on April 10, 2017.”

Israel was central to Lurie’s life from very early on, as expressed in his very short bar mitzvah speech in 1926:

“I pledge to continue my parents’ work for Palestine.”

Lurie first went to Mandatory Palestine on a tramp steamer in 1928. He recounts the 28-day trip. “We went through the Dardanelles to Constantinople in the Black Sea and then to Haifa.”
Lurie enrolled in the pnimiya (boarding school) of the Beth Sefer Realli in Haifa. He referred to himself as the “halutz” [pioneer] for his parents who made Aliyah the following year and “rescued” him from the terrible food at the boarding school.
At that time, Haifa had the only public pool in Palestine. Lurie successfully pitched a story on the pool to Gershon Agronsky (later Agron), editor and publisher of The Palestine Post, precuror to The Jerusalem Post. Agronsky liked Lurie’s work and hired him on as a cub reporter.
Lurie got his first big scoop through a friend’s older sister. She invited him to Shabbat dinner along with two men who worked for the Palestine Public Works Department. “Now, for months there had been lying at the side of the road from the coast up to Jerusalem water pipes waiting to be installed while the residents of Jerusalem continued to ration water that had been collected during the winter rains. These guys didn’t know that there was a reporter at the dinner and they told the story of the pipes. They were screwed the wrong way and could not be connected.” Lurie’s story about the water pipes was featured as a series in The Post.
Following his discharge from the U.S. army, Lurie served as a foreign correspondent for The Palestine Post based in New York and helped the Haganah with public relations. When the Jewish paramilitary organization wanted to go public, they asked Lurie to open the first Friends of the Haganah office in the summer of 1947.
Lurie also worked with the Jewish Agency when it was thrust onto the world stage in 1947. As a representative of the Jewish people, the Agency cooperated with the United Nations Special Committee on Palestine (UNSCOP), created to make recommendations regarding the future government of Palestine.
In the fall of 1947, Lurie began working for Hadassah, The Women’s Zionist Organization of America. Hired to professionalize their publication, he stayed on for the next 33 years turning the eight-page tabloid into a nationally known magazine. Lurie remembered vividly the headline of Hadassah’s December 1947 newsletter: “U.N. Declares Jewish State.”
As a peace advocate, Lurie considered his 30 years at Hadassah “very difficult years.” A faction led by a longtime board president had tried to get Hadassah to oppose the settlements. “It didn’t work. Hadassah supported the government, whatever it did, and that was it.”

In the mid-1970s, Lurie joined the Editorial Advisory Council of interChange, the newsletter of Breira: A Project of Concern on Diaspora-Israel Relations. The group endorsed the “radical” position of two states and open dialogue about Israel. Newsletter editor Arthur Samuelson fondly remembers his conversations with Lurie:

He knew the history of these internal Jewish conflicts from before the creation of the State. So, the concept of disagreement and dissent as ways of expressing patriotism were part of his way of looking at the present arguments over the same thing they were arguing about before the State: What is Israel and how can it live with Arabs?”

Samuelson wondered if in fact Lurie was responsible for Hadassah’s silence when other mainstream Jewish institutions were vilifying Breira as a front for the Palestine Liberation Organization (PLO), leading to its demise in 1977.
Surprisingly, Lurie described a meeting with Ambassador Simcha Dinitz in the 1970s at which Prime Minister Golda Meir “gave the Israeli ambassador to the United States orders to kill Breira.”
Since shortly after its founding, Lurie played a significant role in building support for the mixed Jewish-Arab village of Neve Shalom/Wahat al Salam. As he described it, he learned that two friends had helped pioneer the mixed community in 1980. “So, sometime later I climbed the hill to Neve Shalom, and there I found Wellesley and Coral Aron. He gave me his spiel that nobody teaches peace. They teach war, but no one teaches peace. He was starting a school for peace, which has expanded beautifully.

The following winter I get a cable from Wellesley asking me to become president of the American Friends of Neve Shalom. I wrote to Wellesley, ‘The office is in New York and I’m in Florida’. He answered,  ‘You’re the only person interested in us.’ So, I became president of the American Friends of Neve Shalom.”About a year later, a Jew and an Arab from Neve Shalom came to the US to fundraise for the school. “German Friends of Neve Shalom had built the infrastructure. Now they needed $30,000 to build the school. I said, ‘I’ll give you the $30,000, and you can go home.’ I did that. My school was built. Together with the pioneer Neve Shalom school, which I built a quarter century ago, there are now seven Arab-Jewish bilingual bi-national primary schools teaching coexistence.”

Lurie has been involved in many other peace organizations, among them Americans for Peace Now, Brit Tzedek v’Shalom, J Street, and Partners for Progressive Israel. In 2015, he received J Street’s Tzedek v’Shalom award.
Lurie concluded his interview:

So, for 101 years I’ve been watching progress year by year. There was a time when the vast majority of Israelis did not believe that the Palestinians wanted peace. They had a good reason. Arafat rejected peace several times. I think there’s a good chance now. It’s just a chance. There’s no other alternative.”