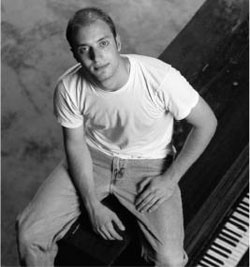 Jonathan Adam Ross is a Jew from Memphis, Tennessee. An actor, poet, and founding company member of Storahtelling: Jewish Ritual Theatre Revived, Ross has taken his unique perspective on Jewish life south of the Mason-Dixon line and crafted it into a fascinating and touching one-man show, Walking in Memphis: The Life of a Southern Jew. The show, which has already enjoyed successful runs in Toronto, Boston, and that hotbed of all Jewish culture, Leeds, England, will make its way to New York next month.
Ross’ website describes the show as such:

Walking in Memphis… is a unique journey of passage, and it is made all the more so by the characters Jonathan inhabits. He begins with his family of course, a logical place to start. But soon branches out into Elizabeth, his family’s housekeeper, Clarence, his barber, Jim Grigg, their Southern Baptist next-door neighbor, and many others. He even spends some time during the show at Jewish summer camp. And by the end of the show, the audience feels like its been sitting in a living room having a conversation with a dozen or so people even though they were in a theater, listening to just one person, and not speaking themselves at all. Jonathan touches on the lives and deaths of many people during the course of the show, and ends the show with a touching, and quite humorous, remembrance of his mother; ending the show in a fitting way, as all Jewish services do – with Adon Olam.

Previews for Walking in Memphis begin Tuesday, November 22nd. Opening night is Sunday, November 27th, and performances have been scheduled Tuesdays through Saturdays at 8pm and Saturdays and Sundays at 3pm, through January 15th at The Dorothy Strelsin Theatre at The Abingdon Theatre Arts Complex (312 West 36th Street, NYC). For tickets ($25) call 212-868-4444 or www.smarttix.com