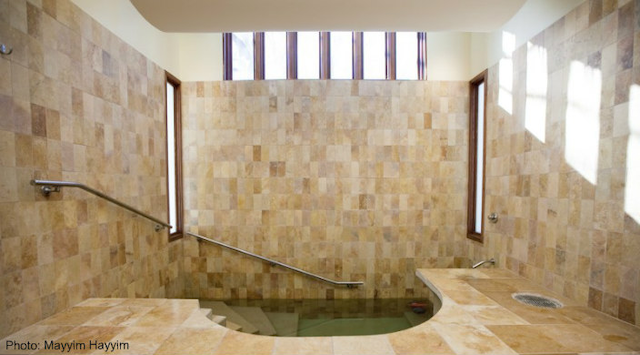 The essay below was originally written as part of my beit din, which took place in August. I wanted to share this personal testimony, in case it’s helpful for other individuals exploring their connection to Judaism and/or converting.

The question, “Why do you want to be Jewish?” is one I’ve been asked several times, sometimes indirectly (by gentiles) and directly (by Jews). Let me tell you why — The community, comfort, and challenges I’ve experienced through learning and practicing Judaism have transformed my view of religious spaces.

To feel accepted and to accept others

I was raised in a tiny town in rural Indiana, a place with one stoplight and zero diversity. Until high school, I went to a Christian church each Sunday. No one ever stopped to tell me why we went. We just did. I was troubled by that, a little bit, but as a kid I didn’t have the language (or the gall?) to question religious practices.

I said the prayers, sang the hymns, and watched as my grandma would tear up from feeling so connected to the experience, to her God. But I never felt that connection, at least not standing inside of a Christian institution.

Ultimately, it was the sermons against homosexuality that pushed me over the edge. As a teenager, I was sometimes dragged to my stepmother’s church, which was overt in its disdain for queer people. It made me so uncomfortable to exist in that sanctuary I would cry silently throughout the service, rendered speechless by the worshippers shouting with joy. Eventually, I figured out how to say no; I stopped going to church and stopped praying, even when I was alone.

At age 25, I am still fidgety in any space that’s decidedly Christian. As I’ve been building out what Judaism looks like for me, I’ve found inclusive Jewish spaces where queer people — and other marginalized folks — are unhesitatingly embraced.

My rejection of the religion I was raised with meant that I was missing a sense of community. I spent roughly six years spiritually lost. Then, in college, I made a Jewish friend (hooray for religious diversity within universities!). When the pandemic hit, my partner and I decided to investigate this whole ‘Judaism’ thing further. Some people gained a hobby during Covid, I gained a religion. (Okay, and I started cross-stitching, too.)

By the High Holidays that year, we had begun attending services with Tzedek Chicago. For the first time, I found myself crying for positive reasons in a religious space. I was grieving that it had taken me so long to get there, but I was overjoyed by the beautiful, meaningful rituals I was now a part of.

One word has consistently remained at the top of my list for my Hebrew name — Nechama (comfort). Nechama pretty well summarizes my connection to Judaism. In English, we’re used to thinking of “comfort” as a state at ease and without pain. In Hebrew, nechama goes beyond that. It does put me at ease to have found a faith and community with values reflecting mine. But, that doesn’t mean there is no pain or strife. On the contrary, Judaism has taught me to value grief and accountability, neither of which are carefree concepts. It has provided me with a framework to grapple with difficulties, whether it be questions around theodicy or — relatedly — the failing health of my grandma, whose name I have turned over and over again as we say the prayer for healing, asking for nechama on her behalf.

When I enter Jewish spaces, I am not in a “state of ease,” but I do take solace in knowing I belong there.

To embrace the struggle

In my understanding of Judaism, differing thoughts and opinions are valued and uplifted. Whereas I was raised around dutiful Christians who didn’t question the church, Jews are often questioners. And we’re not shy about it. We dare to ask, “What does the Torah mean? Why should we believe it?” We care so much about what it means to be the people of the book, we examine it from every possible angle — and start that cycle over annually. Judaism proved you can, in fact, feel a strong connection to your faith and/or to your God, and still hold both accountable.

My Judaism doesn’t just keep its nose hidden in books. While I understand now that they’re used to the point of cliché, “tzedek, tzedek tirdof” and tikkun olam are two concepts that caught my attention. Here was a religion that not only accepted me, but also encouraged its followers to actively pursue justice on behalf of everyone, for the betterment of the world? There could not have been a better answer in response to the aimlessness I’d been feeling.

There is, obviously, an exorbitant amount of struggle and divisiveness within the Jewish community itself. Stances on Israel/Palestine loom like a dark cloud over every Jewish communal space, but I feel grateful to be part of a congregation of people willing to stand in the rain (rather than with those who extend their umbrellas in denial or oblivion).

My faith doesn’t attempt to tie up injustice in a neat bow and tuck it away by simply asking for “thoughts and prayers.” We say the prayers but then take action, helping those who receive little or no support from the systems in power.

The ritual and intentionality of practicing Judaism appealed to me almost immediately. I am a “Type A” personality who likes to have boxes to check and concrete answers for everything. A lot about Judaism challenges that mindset.

I spent my first Rosh Hashanah on a trip in Ohio, my partner and I fumbling our way through Tashlich and watching as ducks consumed the crumbs we cast off into the murky water. At first, I felt silly. But I challenged my cynical self to take it seriously: “What had I done in the last year I regretted? How could I be better, not just for my sake but for the people around me?” It felt revolutionary to recognize that I was worthy of introspection. There is a lot of talk of mindfulness these days, often as a buzzword with little to demonstrate its practical implementation. Judaism has provided a beautiful framework for me to figure that out for myself.

I love the cyclical nature of Judaism, and how it is rooted in centuries of tradition. When we gather for each ritual, it makes me smile to imagine Jews going back centuries gathering for the same holidays and saying the same prayers. On the other side of the coin, I can imagine future generations, hopefully including my own lineage, doing the same.

Every moment that I’ve engaged with this faith feels like a movie scene, where the characters unearth some old tome that provides a clue they’d been missing. That “What does this all mean?” sentiment, keeps me excited about my Jewish journey. I’ve learned so much about myself I didn’t expect to. I’ve discovered a rich, complicated, enticing-yet-intimidating set of rituals and values; I’ve discovered that I belong there among them.

There is no “right” way to be Jewish. There can be no finite end, where I’ve learned all there is to learn. Being who I am, sometimes those two elements of Judaism frustrate me (as my Rabbi has heard more than once). However, it’s a challenge I appreciate, because it means I have my whole life to keep discovering.

Now, I’ll get to continue doing that as a formal member of the Jewish community.

Marissa Smith-Kenny (they/she) is a writer and marketing professional with a passion for building and uplifting equitable systems. Their work has included chairing marketing and strategic planning committees for a youth education organization, leading equity and inclusion programming at a regional-tier marketing agency, helping nonprofit start-ups secure grant funding, and managing communications for a national Jewish nonprofit.

Thank you to Rabbis Brant Rosen, Jessica Rosenberg, and Rabbi Linda Holtzman for being a part of my beit din.