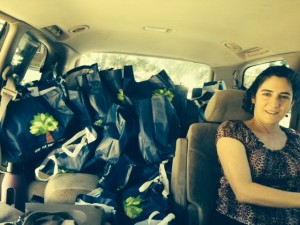 The other mitzvah (On Homelessness, Purim, and Jews)

March 6, 2015May 4, 2018 by Aryeh Cohen
Yesterday, Purim, at noon, three of us from the Shtibl minyan went to fulfill the orphaned child of the Purim obligations. Starting in the year Shtibl was established (15 years ago) we decided, as a community, that we would put as much effort into matanot la-evyonim/gifting to the poor as we poured into mishloach manot/exchanging gifts, hearing the megillah, and having a raucous Purim meal. We started with PB&J sandwiches delivered out of a van driving east on Pico Blvd., and gradually built out (with inspiration from The Giving Spirit), making mini-survival packs (tuna packs, energy bars, first aid kits, antibiotic lotion, hand cream and so on) to go with the PB&J. This year in our small community (20-30 members) we put together 144 packs which were delivered on the Santa Monic boardwalk (“home of the homeless” to quote Harry Shearer) and on Skid Row. Three adults and eight kids went west to the boardwalk, while we drove east to skid row.
[pullquote align=left] The three of us were shocked and depressed. We should be. We were trying to drain an ocean with a spoon.
[/pullquote]Los Angeles’ Skid Row (called “the Row” by activists and people who live there) is more or less a 54 square block area of downtown Los Angeles. It is not an official designation, although Waze, the GPS navigation app, told us exactly how to get there when we typed in “skid row.” There are somewhere between 2500 and 5000 homeless people living on the Row, according to counts by the Los Angeles Housing Services Authority and estimates of the Chamber of Commerce. Still, knowing those numbers (I wrote about LA’s homeless population in my book Justice in the City) does not prepare one for the human reality.
As soon as we crossed East Seventh Street, driving north on San Pedro (not far from where a homeless man had been shot by an LAPD officer at the beginning of the week) we started seeing the encampments along the sidewalks. Makeshift tents, actual tents, blankets, people sitting on overturned plastic buckets or on the sidewalk, people leaning against a wall or a chain-link fence.
We stopped our van in front of one of the encampments and asked if people could use the food, water, and other stuff we had brought. There was an immediate response and in under ten minutes we distributed at that site the eighty bags we had brought with us. People came from down the block and across the street, some folks making sure that others also got bags. We chatted a bit and pulled away.
This was one encampment. There were one or two such sites on every street. The three of us in the car were shocked and depressed. We should be shocked and depressed. We were trying to drain an ocean with a spoon.
This was, however, ritual. We had no thought that we were going to solve the homeless problem—or any single homeless person’s problem—by delivering survival kits on the street. Hopefully, the stuff we delivered would help people out for a day or two, make their lives a little more livable today. The ritual serves to remind one of the enormity of the problem—of the scandal that in one of the wealthiest cities in the world there are more than 50,000 homeless people in Los Angeles. The ritual act of including the homeless in our community by delivering survival kits to them must serve as a goad to political action.
[pullquote] What if all these folks took up matanot laevyonim as an equally important mitzvah?
[/pullquote]Each year synagogues across the country (and the Jews in those synagogues) expend time and effort producing professional grade spiels, and sending out artisanal, themed mishloach manot. All this is fine and well. What if all these folks took up matanot laevyonim as an equally important mitzvah? Not merely by donating money to a third party organization, but putting together kits, finding out where homeless people live, and distributing the kits on Purim? It is not such a daunting task—but it is one which has an immediate (though slight) impact, and also serves as a rude awakening to the enormity of the problem.
If more communities participated in this type of action, then there might be more indignation and resistance when local governments attempt to legislate against eating, or resting in public—or even feeding people in public. Beyond this, it might shock people into trying to work for solutions to the problem itself. This is not a problem without a solution. Utah, for example, has realized that the solution to homelessness is giving homeless people houses. Who would have thought?
Most importantly, any action which knocks us out of our self-sustaining bubble of comfort is good. Any day on which we question our own privilege, the serendipity of the forces that brought us to this zip code, is a good day.
May we be blessed with many good days.