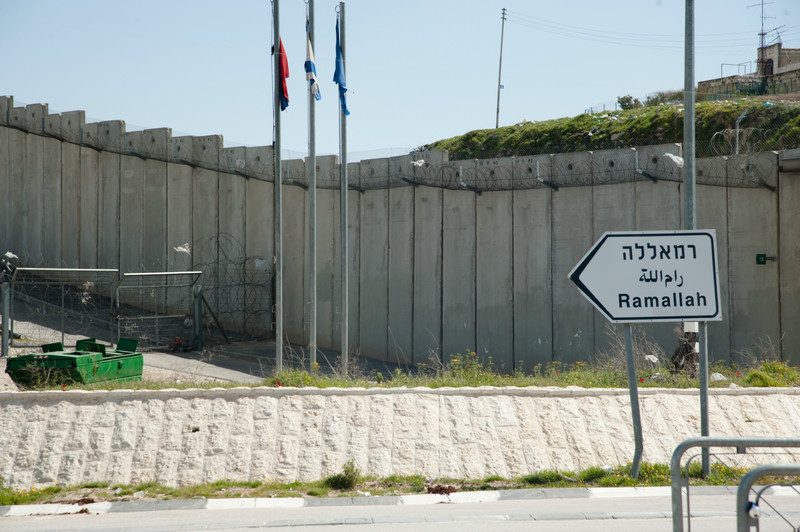 I went to Ramallah two weekends ago to visit a friend living there, and the experiences I had forced me to rethink oppression and how we interact with it, especially in terms of the Israeli-Palestinian conflict.

These 24 hours forced me to question my role within the conflict. Where do I fit in as an activist and potential ally? Can I be Israeli and accepted by Palestinian society? It is easy to believe that the Israeli-Palestinian conflict is black and white, and this weekend reminded me of the often painful variety of colors that exist within it.

Entering area A is illegal for Israelis, and yet no one on the Israeli side is actively making sure we stay away. The first privilege I noticed is that I am a dual citizen with American-accented English. No Israeli soldier or officer talked to me or questioned me while entering through Qalandiya (a checkpoint leading to Area A), but I had my shiny passport and perfect English in case they did. This American privilege I have was much more useful in Ramallah itself, where people heard my English and assumed I am a foreigner. I didn’t need to remain quiet in order to hide my Israeli accent, nor did I need to overly fabricate my origins. When someone asked where I am from, I answered that I am from Philadelphia, conveniently leaving out the last eight years I have spent in Israel, my other home.

Another privilege I noticed was simply that I am Israeli. Under Israeli law, it is illegal for most members of either side, Israeli or Palestinian, to visit the other, but the reality is that Israelis can easily enter area A, while Palestinians cannot simply cross a checkpoint into Israel proper. This difference cannot be ignored, because while both sides may have policies that prevent interaction and entering each other’s space, the scale is off-balance. During those 24 hours, I put myself into the space of the other, which Palestinians cannot do as easily (if it all), and that set the background for most of my trip. We tend to talk about peace and about conflict as though it is two equal parts of a scale, but often that scale is tipped to favor one side more than the other.

Gisha- Legal Center for Freedom of Movement – conducted a study which revealed that one fourth of Gaza residents have relatives in the West Bank. However, the draconian laws and bureaucracy make it near impossible to visit relatives in another part of the occupied Palestinian territory (oPt) or Israel. In fact, many people can travel to see their family only when it falls under an extreme humanitarian circumstance, such as illness or death. Entering through Qalandia, I thought about the hypocrisy of it all: I can just pass through this checkpoint to visit a friend, while a fourth of Gaza residents cannot even visit their family. In fact, for me this is a privilege, but for them, it is a right, one that they cannot access. I had a strong gut feeling that I am not supposed to be here; why should I be able to visit a city in which people that have not seen their own relatives in years cannot access?  Sometimes, privileges should not be taken advantage of.

I also could not ignore how present Israel felt inside area A, and not just at the border. Walking in the market on Friday, a guy tried to sell me apples from the Kibbutz I once lived on. BDS stickers and messages of support for the movement were plastered all over my friends’ apartment, and yet it seemed to me that it would be pretty difficult to avoid buying Israeli-made products.

Even in the background of all of this, there was something I couldn’t ignore. Structural privilege and oppression is often a two way street. I mentioned above that my Americanness was convenient while in Ramallah. While I never planned on running in the streets announcing my Israeli citizenship, I didn’t expect to be hyper-sensitive to the need to hide it either. However, as we walked down one street, I looked at a piles of books being sold and noticed a copy of Mein kampf. When one friend asked what the peace movement is like on this side of the green line, she was told that here they talk about resistance, not peace. Another friend, who is working in Ramallah, said that one of her co-workers has stopped engaging with her since finding out that she is Jewish. These are standalone examples, of course, but it still set a feeling that Israelis, even just Jews, are not very welcomed in this space, regardless of one’s political views.

I felt the conflict and the occupation in a drastically different way than I had before, through the temporary loss of some of my privileges. Being an Israeli in Area A certainly lacks the feeling of safety I am used to having. Saturday afternoon, I read about the funeral procession happening in Duma for the father who was burned to death by settlers. According to the article, there was more than one militant there calling for violent revenge in the West Bank. When we left Qalandiya for Hizma, a checkpoint for Israeli citizens, we could not find the right bus to take. When a taxi driver asked for 150 shekels, I wanted to bargain the price, but he didn’t know English and I don’t know Arabic. I felt confident that one of the four men in front of me knew Hebrew, but in the heart of Area A, only two hours after this funeral and violent call to action, my gut was telling me to only speak in English. In Israel, I am an activist; in the oPt, I am first and foremost an Israeli.

Oppression on all levels is wrong. However, I left Ramallah feeling discouraged and somewhat scared. How do I act in solidarity with a society in which I am not accepted and potentially in danger as a Jewish-Israeli. How do I navigate between my personal truths telling me that the occupation is wrong and my personal and national identities of which I should not be ashamed?

Part of the equation I cannot ignore is space and access to it. No Palestinian or even a foreigner who calls Ramallah home asked for me to come as their guest. I came on my own accord to visit a friend who has herself lived there for only a month. In essence, I was met with a hostile environment partially because it is not a space I was asked to enter, but one into which I forced myself. In the Palestinian village of Susiya, where I attended a protest last month, I was a declared Israeli and certainly felt safe. Perhaps the difference is that residents invited Israelis into their space and even asked that they protest in solidarity with them. No one in Ramallah asked for me, a Jewish-Israeli, to enter his or her territory, and therefore, I was trespassing. Assuming I had a general right to visit in the first place was quite shortsighted. That is not to say it makes anti-Semitism nor calls for violence against Jews or others okay (it absolutely does not), but it does place this experience into a greater context for me. Maybe one day, Jewish-Israelis will be able to travel Ramallah and greeted with open arms or at least amicably, but that day won’t come while Palestinians cannot travel to Tel Aviv to experience the same. In the meantime, I will fight against oppression, against Palestinians and against jews, from Israel, travelling to the oPt when invited.

Thinking again on the apples from my Kibbutz and the BDS signs plastered over the city, it seems to me that maybe what Palestinians want from the movement is the ability to be free from occupation, especially in their own communities and space. In Israel it is easy to dismiss Palestinians and, often, their existence, as we are not surrounded by them, their products, or their language. In the oPt, doing so would be impossible. Every store has a product with Hebrew lettering. The checkpoints were made to keep Palestinians from entering Israel, not for keeping Israelis out of the West Bank. Even I, a Jewish-Israeli, was permitted without difficulty to enter into their space.

Palestinians cannot choose to place or remove themselves from the reality of occupation. They are forced to interact it.  As I left Area A back to the relative safety of Tel Aviv, I wondered if maybe that is the essence of occupation.