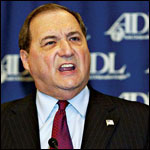 What does ADL Stand For?

I published a rather scathing essay about Abraham Foxman and the Anti-Defamation League in the latest issue of American Jewish Life, and surprisingly I haven’t received anything but positive feedback about it.
A bit of background: Over the waning months of this past summer, the ADL found itself embroiled in a small crisis. It’s refusal to label the Armenian genocide as genocide was causing towns in the Boston area to yank their relationships with the organization, specifically it’s anti-bigotry campaign. When the head of the ADL’s Boston chapter spoke up in defiance of the national organization’s position, he was fired. A firestorm erupted, and he was re-hired, but only after the ADL and it’s director, Abe Foxman, had been severely tarnished by the episode.
My article was a slightly broader piece about Foxman’s motor mouth, but in the end it revolved around this core argument:

“This is an organization created to fight bigotry generally and anti-Semitism in particular, to make our world better by exposing hatred and holding racism, genocidal or otherwise, to account. Where exactly do they get off apologizing to genocide deniers? In two sentences, Foxman had broken the camel’s back, letting a deluge of missteps and hyperbolic statements turn into the absolute shredding of his organization’s moral authority.”

All of this is wonderful fodder for debate, except it would seem nobody’s picking up Foxman or the ADL’s side in this debate. So much for the debate, but I have continued to think quite seriously about the subject of the ADL’s mission:

“The immediate object of the League is to stop, by appeals to reason and conscience and, if necessary, by appeals to law, the defamation of the Jewish people. Its ultimate purpose is to secure justice and fair treatment to all citizens alike and to put an end forever to unjust and unfair discrimination against and ridicule of any sect or body of citizens.”
— ADL Charter, October 1913

You have to understand this about me: Even as I’ve lambasted Foxman and grown ever more dismayed with the national leadership of many Jewish organizations, I’ve also remained hopeful about these groups. I interned for the ADL in Atlanta when I was in college. I’ve worked with AIPAC in the past, and I’d like to think I can work with groups like these in the future.
The problem, from my vantage point, is that they’ve lost site of their respective missions. As I said in the article, the ADL was founded to combat anti-Semitism specifically, but bigotry generally. It did this based on the notion that when any group (ethnic or otherwise) was targeted, everybody lost something. Thus the group rightfully has argued for broad anti-bigotry initiatives and participated in educational programs that don’t limit themselves exclusively to Jew-hatred. That has never meant that the ADL has not taken the lead on anti-Semitism specifically, nor has it ever let go of its position as the official watchdog against hatred directed at Jews specifically, and I don’t have a problem with that.
Now, what does that have to do with Israel? Seriously. I’m asking. Exactly what in the ADL’s mandate or organizational mission gives it a reason to speak up as a proponent of Israel? I’ve read all the literature on the “new anti-Semitism” that supposedly exists as Jew-hatred masquerading as criticism of Israel. To me, that seems a conflation of parochial Jewish interests with the larger mission of curtailing hatred and bigotry, both towards Jews and non-Jews alike.
So I’m asking. Can anyone provide a compelling argument why Abe Foxman is at least right in principle, why there’s some reason to link the mission of combating anti-Semitism and bigotry should be conflated with defending Israel, or getting wrapped up in Israeli political considerations such as those that presented themselves in the Armenian case?
Seriously. I’m asking.

8 thoughts on “What does ADL Stand For?”