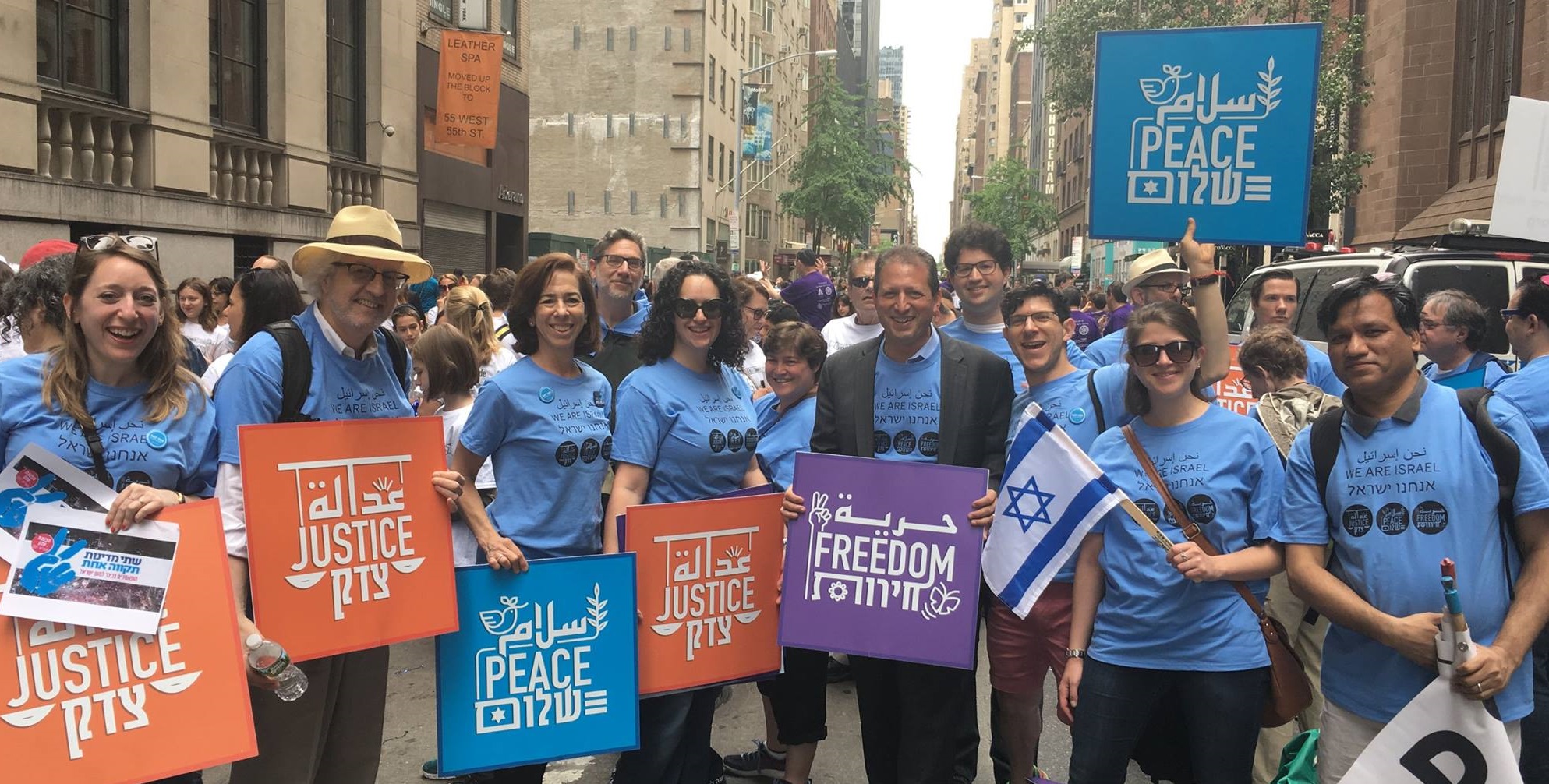 Why I March as a Progressive in the NY Israel Parade

On Sunday June 5th, different groups of young American Jews opposed to the occupation both marched in and protested the 2017 NY Israel Parade. Read below and here for differing perspectives on being anti-occupation in Jewish mainstream spaces.

[pullquote align=right] Each year, I’m disappointed…And yet I continue to march.
[/pullquote]For the past several years, I’ve joined the New Israel Fund-led Progressive Cluster to march in the Celebrate Israel Parade. And each year, I’m disappointed.
I’m disappointed by the people who boo and wave actual fists and call me and my fellows marchers Israel-haters as we march down Fifth Avenue. I’m disappointed that the organization that I volunteer with, J Street, is not allowed to officially march, because we are designated as a political group, but that other groups are allowed to carry banners promoting things like a united Jerusalem, which is no less a political position than the one that J Street takes in promoting two states (which, of course, is the official position of the Israeli government). Each year that I march, the disappointment wears me down just a little bit more.
And yet I continue to march. Because I know that the parade is a bit kitschy. And I know that it’s not entirely inclusive of everyone in the Jewish community. I know that not everyone else who marches and spectates appreciates my presence. But regardless of all that, I march because, at the end of the day, I love the Celebrate Israel Parade.
[pullquote align=left] But I’ve gone to this parade every year of my life.
[/pullquote]It’s by no means lost on me that not everyone in progressive Jewish circles feels the same as I do, even the ones who join me in marching with the Progressive Cluster. But I’ve gone to this parade every year of my life. Some of my earliest memories are of joining my family to watch the marchers going by, and I can still clearly remember the sheer fun of marching with my day school in middle and high school, back before I had any sense that there was anyone who even could think of the day as anything but a good time. And I look forward to it every year all over again.
For the past several years, I have marched with the Progressive Cluster, and for each of those years, I have been happy and disappointed, excited and dismayed, energized and emotionally drained. Each year, I am all of those things at once.
And yet, each year, the good outweighs the bad. For all of the negatives, I have never once marched begrudgingly, or out of a sense of obligation, or because I want to in some way “stick it to the man” (by which I mean the New York Jewish establishment, of course). The reason I have always marched, and will continue to march, is simple. I do it because I love Israel, because I want to share that love with my community, and because I know that my community actually can do a better job of making me feel included.
[pullquote align=right] The New York Jewish community won’t change if I berate it, complain about it, and give it up as a lost cause.
[/pullquote]Do I wish that I felt completely welcomed, that my opinions were counted as entirely valid, and that I be allowed to express my love for Israel to its true and fullest extent? Sure. But I’m a firm believer in making change happen from within existing systems, especially when they are systems that I care about. And I know that there’s no way that anything that I don’t love about the New York Jewish community will change if I berate it, complain about it, and give it up as a lost cause. So rather than leaving the community and the parade behind, I continue to march, in the hopes that one day my presence there as part of the Progressive Cluster will feel as joyous and as uncontentious as it did as part of my day school.
And until then, I will take the disappointments as they come, because I know that my love for Israel may be complicated, but it’s also true and deep and everlasting. And I look forward to the day when the entire community understands that to be true.
[Correction: A previous version of this article incorrectly said signs supporting a two-state solution weren’t allowed in the Celebrate Israel Parade. Signs supporting a two-state solution are allowed; all signs must be approved by the parade organizers.]