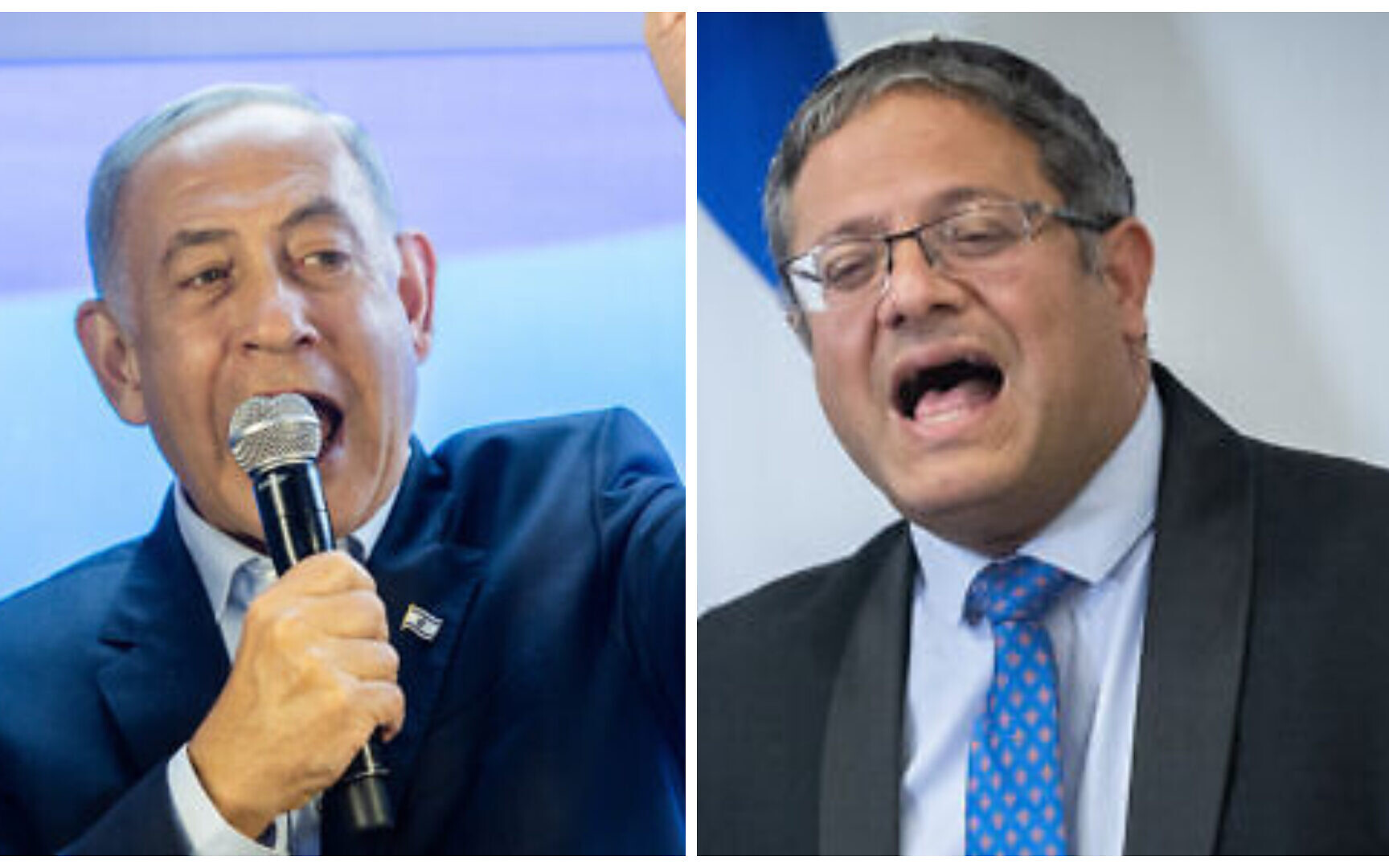 In 2019, nearly the entire spectrum of American Jewish organizations castigated Netanyahu for legitimating Itamar Ben Gvir and his “Jewish Power” party. Even AIPAC called it “racist” and “reprehensible” and reiterated that they would refuse to meet with any of its members.

Today, that party’s list is predicted to win 12-14 seats in next week’s parliamentary elections, making it the third largest party, while the bloc that backs it and with whom it shares core ideas (led by Netanyahu) is favored to win the election outright. Another dozen seats are part of the Rightwing opposition. Netanyahu has promised Ben Gvir a cabinet position and the latter has made clear he intends to demand the ministry of public security, which includes control over the police, whom he intends to empower to use deadly force against protesting Palestinians. The coalition intends to end judicial oversight of legislation, and cancel laws against violations of public trust, to give themselves total power,

Whether or not Netanyahu’s bloc manages 61 seats is still an open question – they are currently poling at exactly 60 – but either way Netanyahu’s bloc with Ben Gvir will certainly win a majority of Jewish votes, since their opposition includes the Israeli Arabs. How should America (and American Jewry) relate with Israel should that bloc win and the fascists enter government? But also, what should happen should they be defeated but with a majority of Jewish votes? What does it mean for America and American Jews that a majority of Israeli Jews are voting for them?

There is some precedent to consider. After neo-fascists (FPÖ) first came to power in Austria in 1999 as a junior coalition partner, Israel recalled its ambassador and cut off diplomatic relations for three years. Of course, that was the olden days. Today Israel celebrates its close relationship with authoritarian parties and regimes, including the FPÖ, as long as they support illiberalism and settlements in Israel. Does that mean American Jewish organizations will do the same?

It seems so. Their message so far suggests times have changed for them as well. Today, most of those same organizations remain silent, refusing to use their political capital to encourage Israelis to vote against the fascists, as they did in 2019. This is the case even as the mainstream media comfortably – and accurately – labels this party “Jewish supremacist.”

I see no reason to doubt that as Minister of Public Security Ben Gvir will be welcome at AIPAC, at Jewish Federations, and probably even Hillels, and certainly the prime minister and other politicians who empower him – and support much of his policy agenda – would be. Even as a powerful opposition leader, is there reason to doubt he would be welcome?

I’m already noticing two phenomena. First, regarding the government itself, the goal posts have shifted. The language of “Israeli democracy” is leading groups to suggest that they can elect whomever they want (ignoring that millions of people they rule – in lands they claim as Israel – cannot vote) and if they choose fascists, so be it. (Well, of course they won’t call them fascists. They’ll call them extremists, or even just rightwing.)

On the other hand, even as the goal posts have shifted, there is a pretense that nothing has substantively changed. Thus, in response to reports of the criminality of the occupation due to its clearly permanent nature – both de facto and in Israeli government statements – responses continue to use the same tired language from a different era: “complexity,” “disputed,” “Palestinian intransigence,” etc., as if Israeli leaders have not openly and proudly announced that its presence in the West Bank is permanent, while a majority of its voters are pushing for an even more illiberal regime. Reading responses to the UN’s “one-sided” report about the occupation last Friday, I honestly wonder if they are just cutting and pasting from decades ago.

Moreover, all of this is happening at a time that state and vigilante violence against Palestinians has been skyrocketing, with video after video of soldiers (following proper orders and procedure, I’m sure) protecting the assailants or even joining in. Of course, politicians did get very upset at one act of violence — when Jews attacked a soldier. They even got a little bit upset when an elderly Jew was beaten mercilessly on camera, although that one got much less attention than the young soldier attacked and the police have so far not made any arrests. Otherwise, crickets. The system was working as it is designed to work. (The Jew who attacked the soldier is already home on home detention. Contrast that to a Palestinian teenager who, say, slapped a soldier.)

And yet — the leading organizations are talking the same language. The same talking points. If anything, they are doubling down. I suppose as things get worse in Israel/Palestine, that’s the only option short of a paradigm shift, and paradigm shifts are difficult.

Finally, the situation seems especially relevant for Orthodox Jews, who overwhelmingly and openly embrace this ideology. The head of overseas students at Yeshivat Hakotel (Reuven Taragin) – who also heads other major Religious Zionist institutions in Israel and America – is probably correct when he says (in his celebration of Smotrich) that most Religious Zionist rabbis and members are voting for that party, while the rest mostly vote for the bloc that will empower them, a bloc that includes the vast majority of “non-Zionist” Haredim. They are certainly widely celebrated in the Centrist Orthodox “Jewish Press” this week.

Some want to suggest we not judge an ideology by what its leaders and members are doing. I just don’t find it plausible to argue if the vast majority of a socio-religious group supports a particular ideology, that it does not necessarily mean this ideology is central to it. It clearly is. In fact, it’s arguably it’s most central pillar.

As an aside, I spent Tishrei reading as much as I could get my hands on the writings of certain leading Religious Zionist thinkers considered to be “liberal” and “humanist,” and while they would be disgusted by a man like Ben Gvir, in the end they support the same narrative behind systemic inequality. (Rabbi Emanuel Rackman, for example, starkly defended the Jewish settlements and opposed Palestinian equality with racist assumptions about their allegedly violent nature in contrast to Jewish superior morality.) If even they are behind such a worldview, how much more so are those who lack their praiseworthy sensibilities. Is anyone surprised that Rabbi Yaakov Medan, co-Rosh Yeshiva of the West Bank Yeshivat Har Etzion, which is considered moderate in the religious Zionist camp, supports that bloc, out of fear that “external Arabs” might be in the next government? A man of principle, he wouldn’t join with “Jewish Power” in 2019 unless Ben Gvir took down his painting of Baruch Goldstein. That was the line, for him. (This year he supports Ayelet  Shaked.)

We need more thought about what “Religious Zionism” as an ideology means, because based on the expected votes, that list’s name is not unfortunate but actually rather appropriate.

As to how far this will go, it is hard to imagine a limit. The goalposts will probably keep shifting without consequences, especially (paradoxically) if the anti-democratic antisemites win in America next month. What is the answer to this indifference? I’m not sure. For now, it means at least calling it out for what it is and reminding ourselves of the history of shifting goalposts that brought us to this point.

One thought on “Win or Lose, American Jews Must Address the Rise of Israeli Neo-Fascism”