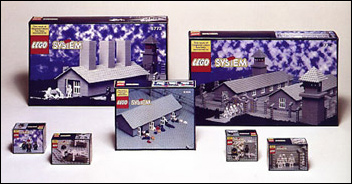 WTF is wrong with people?

Taking a page from the Jewish Museum’s Nazi bondage fetish playbook (I’m referring, of course, to the Mirroring Evil exhibition), The Holocaust Council of MetroWest brings us the latest and greatest in Holocaust youth education:

Join Livingston architect and educator Stephen W. Schwartz and use 50,000 LEGO blocks to build a 400 square foot model of the Warsaw Ghetto, the scene of one of the greatest and most inspirational Jewish uprisings during World War II. Please wear socks and be prepared to get down on the ground for this unique, educational experience.
Recommended for ages 6 and up – Adults must accompany children
Sunday, November 5, 2006
Alex Aidekman Family Jewish Community Campus
901 Route 10, Whippany, NJ

Oh, golly!
You know, when I think about the senseless slaughter of 10,000,000 innocent Jews, Roma, queers, political dissidents and other undesirables, I think LEGO. Because the sheer shock and stupendous horror of history’s most brutal, horrid genocide are so effectively communicated by children’s toys.
Say what you will about Zbigniew Libera’s LEGO concentration camp (pictured at right). It at least is presented in a context which gives way to discussion, whether on the position of the Holocaust in popular culture, the marketing of violence to youth, or even the participation of mainstream German corporations (the proprietors of popular household brand names) in the Shoah. It’s supposed to be controversial.
Six year-olds reconstructing the Warsaw Ghetto with LEGO as an educational activity? That’s senseless and tasteless.
They say that Purim is a taste of the World to Come, for in The End of Days the world will be turned upside down: Reality will be inverted. I used to think this was a good thing — that, in the End of Days, the truth of G-d’s oneness will at last be revealed. But then I considered a different interpretation — the notion that rather, in the End of Days, the truth itself will be stood on its head: Reality will be inverted. In that, in some ways I see Purim as a prophetic warning against the abuse of language, or Orwellianism — the parlor tricks of the Grand Vizier. You know, things like calling imperialism democracy. Or describing a climate of exponentially increasing terrorism as being “safer.” Or, hell, saying that turds smell like roses. We all know they don’t.
Which is all just a roundabout way of saying, it makes me ill to see people trivializing the Shoah in the name of commemorating it. I can just imagine the board meeting that rubber stamped this abomination. Seriously… WTF?
Via Modia:

One of the key issues in Judaism today is the centrality of the Holocaust not just as an historical tragedy, but as a set of religious practices. Unfolding at the intersection of civil religion, media and consumer culture, the public commemoration of the Holocaust can be a highly ritualized event. Mirroring Evil can be a good way to engage students in a discussion of the “rules and rites” of representing and commemorating the Holocaust.

Clearly gym socks and LEGOS will send the appropriate, sanctified, and transformative message to our children about the severity of the Shoah. It’s just like playtime…
I sincerely pity any child whose parent thinks its appropriate to bring them to this event.

24 thoughts on “WTF is wrong with people?”