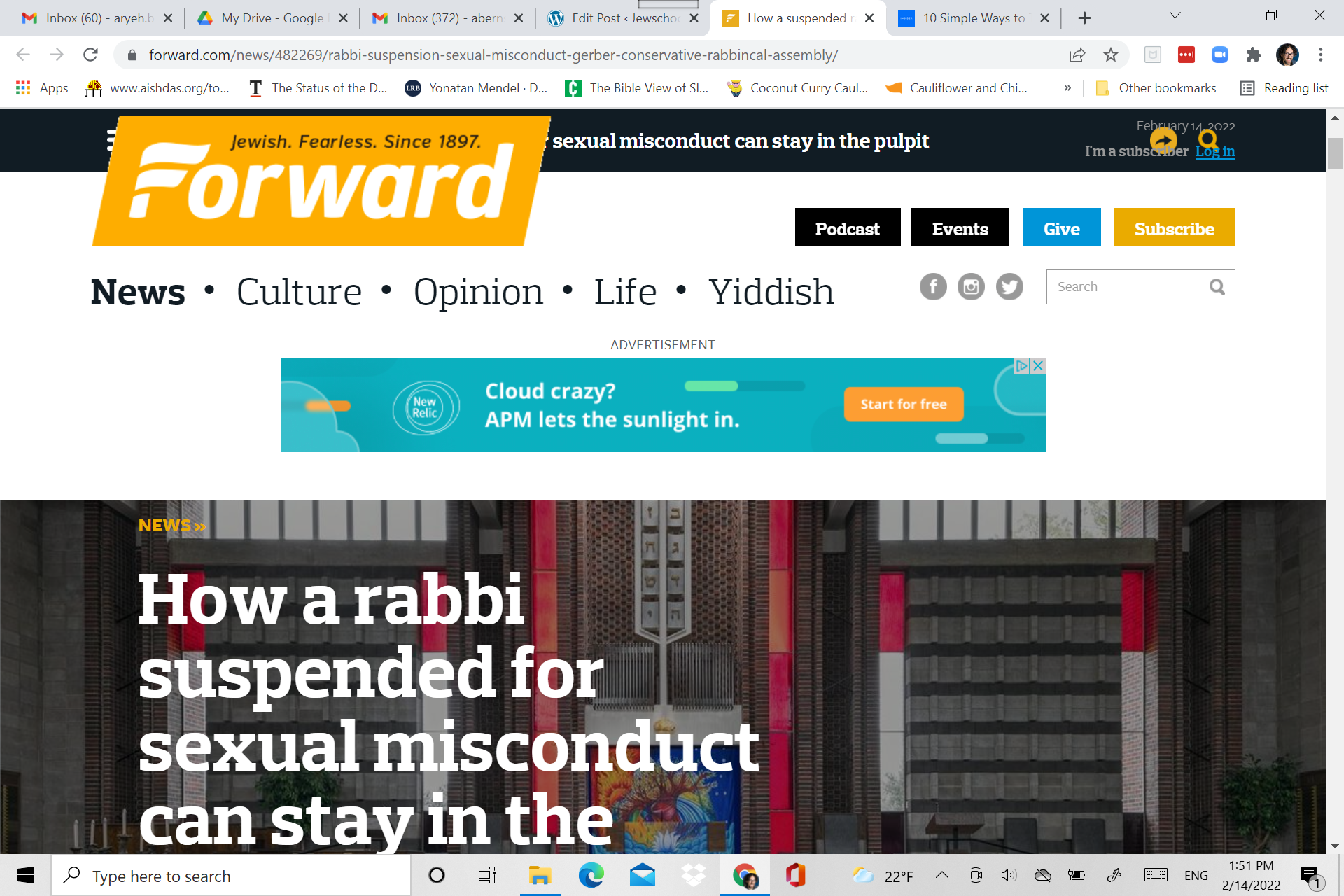 The Forward has published an important article, “How a Rabbi Suspended for Sexual Misconduct Can Stay in His Pulpit“, covering the case of Rabbi Jeremy Gerber. Gerber is a Conservative rabbi who was  suspended from his rabbinic association, the Rabbinical Assembly, on account of sexual harassment of a congregant via inappropriate texting, and who “earned the dubious distinction last fall of becoming the first synagogue leader to have his suspension from the Conservative movement’s Rabbinical Assembly announced publicly.” Nevertheless — and this is the main point — the congregation he serves, Ohev Shalom in Wallingford, PA, voted to retain him and keep him in all his rabbinic duties, despite his predatory behavior toward a congregant. Check out the whole story, including gobsmacking details such as Gerber going on Dan Savage’s sex advice podcast and advising a listener to engage in the same practices for which he, Gerber, had already been censured. This story is appalling. Kudos to Arno Rosenfeld and The Forward for publishing it and especially, to the brave congregant who persisted in going public with her story despite the abandonment, harassment, and betrayal she experienced from her fellow congregants who closed ranks on their harasser rabbi. And kudos to those congregants who stuck with her and supported her. It’s good to know who your real friends are.

I don’t know Jeremy Gerber or Congregation Ohav Shalom. This article is the first I’ve heard of either, so I have nothing to contribute to the story, per se, and I have no case-specific expertise. I would like to share some reactions to the story as reported from my vantage point as a Jewish community member, a 46-year-old cis man who is also a rabbi, who notices themes of communal concern in this article.

There are a few stories here. The lowest hanging fruit, most lurid, and least relevant for communal health, is about Gerber himself. I’d like to encourage us to resist the temptation to respond to this story primarily via “Can you believe this creep?!” kinds of reactions. Those reactions begin in catharsis but end in self-congratulation, passing through myopic avoidance of structural concerns, outsourcing our own, more subtle forms of tolerated misconduct onto the head of one egregious violator.

Another story is: What’s going on in the world of sex advice? When popular national podcaster Dan Savage sought out a rabbi to respond to an inquiry relating to Jewish law, what led him to Gerber? What structures of accountability, research, and relationships are at play there, determining which Jewish voices get heard? Samantha Bee was able to find Rabbi Danya Ruttenberg; why couldn’t Dan Savage? Or why didn’t he just contact the Rabbinical Assembly for a referral? Even if Savage’s team didn’t know about Gerber’s sexual misconduct, who the hell is Jeremy Gerber that he should be summoned as an expert on the laws of niddah and healthy sexual practice?

Another story regards the Rabbinical Assembly and other rabbinic associations: Seeing that the RA’s well-intentioned suspension did not prevent Gerber’s employer from embracing him and giving him full access to congregants, should the Rabbinical Assembly and other rabbinic associations use more muscle in the future? Should they, for example, ban a member from performing rabbinic duties while suspended and expel them if they do so? Should they bar a congregation from future access to association members if they don’t honor a suspension? I think the Rabbinic Assembly acted in good faith and I ask these questions in good faith, not presuming an answer.

By far, though, the most important story is the congregation, the story of the members and board who closed ranks around a rabbi who had sexually harassed one of them, choosing the harasser over their own fellow member who had been harassed, and over potential future targets. I’m just appalled wrapping my head around that betrayal by people with whom she had davvened, planned programs, studied Torah, and comforted the bereaved for many years. The article quotes one congregant who did leave the congregation in protest, disgust, and solidarity with the person who had been harassed: “I literally heard a board member saying that the person who was involved — she must be a slut.” If someone expressing that level of grotesque misogyny was on the board, I must suspect that a long trail of subtler, insidious misogyny pervaded the culture of the congregation. No one says something that heinous out of the blue; what pattern of sexist behavior has been coddled and rewarded in that congregant (and probably others?) for such a person to be on the board of directors?

The article, I think, gives us a few clues as to the culture that made room for Gerber to engage in sexual misconduct relatively free from worry and that created conditions for the congregation to choose him over his victim(s). The article lists several positive qualities of Gerber in the eyes of Ohev Shalom members that made it feel hard for them to suspend him. This is a familiar story: We feel bad about what he did, but he is otherwise so wonderful; how can we do without him?! To my reading, most of the Gerber’s ‘positive’ traits recounted in the article are actually bad and raise big, red flags of a shallow, charismatic narcissist, whose charisma is based on asserting power over others and eroding boundaries. I will go through a few of the accolades mentioned in the article:

1) “‘I thought we hit the jackpot when we got him as a rabbi,’ said Doris Elofer, a former president of the shul who was on that committee. ‘He had an uncanny knack to be able to connect to someone’s soul.’”

If a rabbinic candidate connects to your souls at an interview, that’s bad! That is an inappropriate violation of boundaries. As a rabbinic candidate, you should listen well, mirror back to the congregants what you hear from them, teach meaningful Torah, and respond to their questions thoughtfully. Do not look into their souls; that is a posture of powerfully disarming someone of their personhood. It’s the work of a hypnotist or diviner, not a rabbi. And shul committee, if someone tries to look into your members souls, don’t hire them!

2) The article relates that the harassing texts “extended several weeks, into a High Holiday season in which Gerber delivered four sermons on the theme of ‘radical honesty.'”

“Radical honesty” is a red flag. Anyone who dramatically proposes it is suspicious. Teaching about the value of honesty is sufficient. When someone talks about “radical honesty”, what they are probably hinting at is breaking down barriers, such as talking about sexual fantasies with congregants.

3) The context for Gerber’s “radical honesty” proposition was a High Holiday sermon in which he dramatically told the congregants “that he’d been surprised no one objected to his having brought a spoken-word poet to perform during the prior year’s Yom Kippur service.

‘The majority of you seem to believe and feel that I have the best interests of the congregation at heart, and that I’m doing what I do for the right reasons,’ Gerber said. ‘I was a provocateur, a rabble-rouser. I was being an edgy rabbi… and then you all just loved it?’”

Oh, boy, where to start here? This is littered with red flags, even more so if you read the full text of the sermon. There is no Torah in this sermon at all. Gerber doesn’t teach anything; he publicly navel gazes about himself — his posture, his reception in the community, his stature. “Here I was, thinking I was being a maverick. A rogue operator, tearing up the rabbi-script for what you can and cannot do on the High Holidays.” Dude, you just brought in a poet to share a poem on Yom Kippur. The machzor is a book of poetry. Poetry on Yom Kippur is not maverick. He made a moderately unconventional pedagogic choice and it went well; that’s lovely. Gerber’s language, though, is about the construction of an identity for himself. By expressing self-aggrandizing, narcissistic AMAZEMENT that the congregants weren’t SHOCKED, but accepted his EDGY choice do something altogether reasonable and not unheard of, he lays the groundwork for ongoing predatory behavior by defining himself as an iconoclast and defining the congregation in relation to him as trusting supporters of whatever he does:

“But then I took a step back, and I realized something. You trust me. Here we are, it’s my TENTH High Holiday season with you, we’ve been doing this together for NEARLY a decade now, and even when you don’t agree with everything I’m saying, even when some people feel frustrated when they have wanted more, or different, or less, or silence, or shouting…the majority of you seem to believe and feel that I have the best interests of the congregation at heart, and that I’m doing what I do for the right reasons. Even if and when you don’t know where I’m going with something, and the long-term plan isn’t clear; you trust me. Again, I may be a little disappointed that I’m not the iconoclast I romanticized myself to be… but nevertheless, thank you” (emphasis mine).

Even if no one else in the congregation knew that at the time Gerber gave this narcissistic sermon, that he was serially sexually harassing one of them, they still should have revolted after this sermon, not because there’s anything wrong with a spoken word poet on Yom Kippur, but because their rabbi was narcissistically constructing the community he was hired to teach and serve as being dupes in service of him and in his pathetic delusions of rebel grandeur. This is a rabbinate not about Torah, service, and pastoral care, but a rabbinate of power, domination, and subordination. It is not hard to understand how a community that elevated to its board a person who slut-shames a victim of sexual harassment is a community that remains committed to a rabbi who implicitly boasts that he will continue to violate boundaries, yet, maintain their trust, support, and subordination. You trust me even when I violate boundaries. Don’t forget it!

The soil is tilled for sexual harassment when a community values narcissistic leadership, based on charisma, rather than on substance. The board and membership of Ohev Shalom did not learn the lesson from the exposure of his abusive behavior to soul-search for the trail that led to it. They have chosen to protect him over his victims, past and, God forbid, future. This is the story and I urge all communities to listen carefully and search their own cultures for these perverse signs of a culture of abuse.