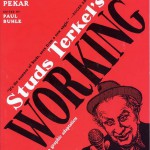 • Harvey Pekar, best known for his American Splendor comics, is working on the provocatively titled How I Lost Faith in Israel (via Bleeding Cool). Incidentally, I recently stumbled across Pekar’s graphic adaptation of Studs Terkel’s Working

, which is a perfect match of adaptor and source.
• If your friends are anything like mine, then you’ve probably already seen the New York Times article about Delis about 30,000 times. Where to begin. The title, “Can the Jewish Deli Be Reformed?” made me want to point out that most of the delis are already on the liberal side of the spectrum, but when the article quotes a deli owner as describing kosher meat as “meat that gets blessed by a rabbi” without correcting him, I wanted to cry.
• If you happen to be looking over my shoulder when Twitter is on the screen rather than Reader, then surely you’ve already seen the list of Joshua Venture Fellows, the first since the Venture rose from dormancy. You’ll note some of Jewschool’s favorite (and previously blogged-about) projects among the list, including G-dcast, Uri L’Tzedek, and Challah for Hunger.
• There’s been a lot of hipster/Hasid synergy lately – did you catch the report on NPR about how Williamsburg is one of the neighborhoods with the lowest census returns in all of New York, thereby screwing New York City out of federal funds and representation?
• Have you signed on to The Charter for Compassion yet? “We therefore call upon all men and women to restore compassion to the centre of morality and religion…”
• I haven’t tried it out in person yet, but Magic Yad looks like a super cool mashup of Leap Frog and Torah.


• The West End Synagogue in NY is having a one-day symposium about “The New Pluralism in American Jewish Life” this coming Sunday. Here’s a link to a PDF of their flier. I hope what they lack in graphic design they’ll make up in content. NB that our very own BZ is one of the speakers.
• One of our favorite blogs, DovBear, interviews a Reform Rabbi! See, most of DovBear’s readers are Orthodox, so whether the interview itself is interesting or not, the comments surely will be. (And by “interesting,” I might mean “a shit show.”)

Sock it to ya: I always said wearing nothing but tzitzit was hot but this takes the (k for p) cake…

The Web is Your Passover Oyster (metaphorically speaking)