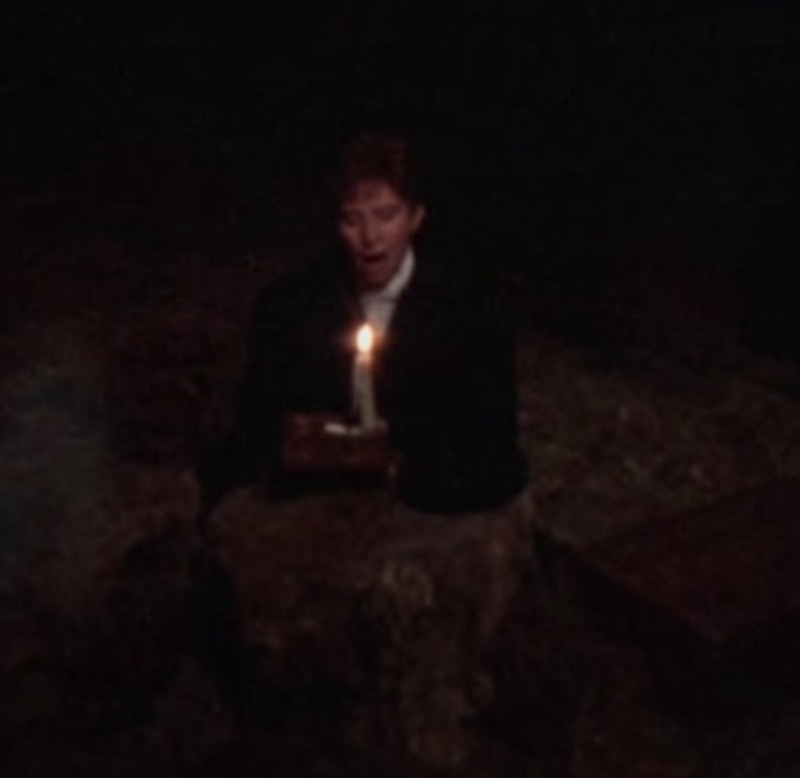 Yentl is a huge deal to Jewish women who believe in feminism and halakhic egalitarianism. First published in 1962 in Yiddish as a short story by Isaac Bashevis Singer called “Yentl, the Yeshiva Boy,” the tale of a Jewish woman who takes on a male persona to study became the 1975 play Yentl co-written by Singer and Leah Napolin, and later the 1983 film adaptation by Barbra Streisand and Jack Rosenthal. In 2012, singer/songwriter Jill Sobule revamped the play to be about a transmasculine character (though, many of the articles mistakenly said transgender girl which is an incorrect assignment of gender). Even before Sobule foregrounded this reading of the story, Yentl was already inextricably tied to Jewish perception of transmasculine experience, whether as an insult or as inspiration: insulting because trans men are not women dressing up as/pretending to be men, inspiring because there is so little representation of people who were assigned/raised to be female and went on to be happy living as men.

After several times being called “Yentl” by those who sought to belittle me as a transgender man in a religious community, I recently rewatched the film to reconnect with and reclaim the positive context of it. I’ve seen a number of women speak to the story of Yentl over the years, but their story is not my story; and yet somehow Yentl is simultaneously their story and my story – it is our story. We shouldn’t have to fight over representation. There needs to be more stories for and by people with marginalized gender experiences, but also this text is big enough for all of our readings of it.

From the first moment of the film, Yentl is over gender stereotypes, which is a particular challenge for her as she lives in a society that is gender segregated. Talmud and scholarship for men, picture books and family responsibilities for women. As recently as 2016, I was in an Orthodox shul in the women’s section (despite being out of the closet, I was encouraged to present as a woman for safety), and many of the prayer books were smaller, pink or purple, and contained pictures and/or psalms rather than most of the texts… and women were expected to pray as quietly as possible. Yentl’s world is not as far from our own as some of us would like to think.

Yentl loves to study, and she hates that women can’t read. She is a terrible cook. Her father, a teacher of Talmud, is concerned for her, but he is a relatively supportive parent. When he is teaching a student Pirkei Avot, Yentl interjects multiple times. It’s no accident which mishnah the film has them study: “Who is wise? He who learns from all men.” The film presents the Talmud itself as one of the first pieces of evidence to advocate for Yentl studying. Because we are a people of argument and conjecture, stick with me. Person and man are the same word in the Hebrew, and even “mankind” can refer to everyone — not just men; it is not a stretch to insist that “all men” here includes people regardless of gender, proving that Yentl has wisdom to offer.

The tallit is Yentl’s first change into traditionally masculine clothing; Today, more and more women wear these clothes and study Torah/Talmud, but for many in more Orthodox circles, there is still a debate as to whether women (or nonbinary people or trans men if they are even still in the community) are allowed to. Yentl wears the tallit at night, which is typically not when one would wear a tallit or tefillin, but she, much like Rashi’s daughters, studied with her father secretly at night. Time and time again, in shul, at the cemetery, wherever she goes, she is silenced and expected to be small. To me, being forced to be with women as a trans man has been presented in and out of religious spaces as “for my wellbeing.” Yentl and I both know what is best for ourselves. When Yentl cuts her hair, it’s a step. It doesn’t change everything, and in these days, if one is a woman, short hair hardly changes anything. But to some transmasculine people, myself included, that chop feels like a taste of freedom.

Coming into Jewish masculinity late in the game is a very turbulent process, and to see it represented on screen is affirming, and Yentl was one of those pieces of media that changed what I believed could be possible when I was younger.

The film is a musical, but Yentl is the only character who sings. One may read into that as an upset to the concept of Kol Isha/ forbidding women to sing, or the idea that a queer character is what makes this story into a musical. I support both. The most famous song from Yentl is “Papa, Can You Hear Me?” in which Yentl is looking to guidance from her dead father and from G-d, but she is also making sure that she is able to be heard by anyone, because while she (unlike many women) was given an education, she was raised to be voiceless, even to G-d.

Once Yentl changes presentation and becomes Anshel, he is able to start his journey to a yeshiva. Mandy Patinkin plays a character named Avigdor, who is one of the top students at a yeshiva in Bechev. Avigdor saves Anshel from being harassed for being smaller than the other young men who are travelling back to their yeshivot. Avigdor brings Anshel along with him to Bechev, becomes his study partner/hevruta, and their relationship is one I am particularly intrigued by. The intensity and intimacy of hevruta is very close to a romantic relationship. The sexual tension we feel between Anshel and Avigdor is no dramatic invention; the electricity shared between two study partners in the heat of debate and discovery can be palpable and feel bisexual.

Complicating their relationships is the other character in this story’s love triangle, Hadas. Hadas loves Avigdor, and when we first meet her, we assume they will end up together. When Anshel first meets Hadas, he thinks about he would love a woman if he could, but he just doesn’t feel that way. He also realizes that he loves Avigdor. Does Anshel begin to want Hadas to make up for the fact that he can’t have Avigdor? Perhaps, but regardless of motivation, Anshel eventually ends up marrying Hadas.

We later learn that this relationship swerve may be due to the irony that Avigdor himself might be an unfit match for Hadas, because like Anshel, he too has a secret: a brother who died of suicide. Anshel and Avigor are bonded in many ways by their shame and fear of other people’s judgment. Something that Yentl’s father said, which Anshel repeats, is that women studying Talmud closed the windows not because G-d would judge them, but because other people would. And I feel that. People are really judgmental of anyone who’s different, and both then and now there can be major life consequences resulting from that judgement.

Throughout the film this awareness of difference is underlined with scenes relating to Anshel’s body. Going into Anshel and Hadas’s wedding, there’s a lot of banter about clothing and body type that is relatable to me as a trans man. Tailors get to know bodies very closely, and people who buy suits even today are subject to extreme scrutiny under binary constructs of sex and gender and physiological standards, so I can imagine that over 100 years ago, it was very uncomfortable.

There is a scene where Avigdor wants Anshel to swim with him and the other students. Avigdor and the other boys are nude, and Anshel refuses. This comes right after they debate whether men and women are different. This sequence has a very clear point of view that is both aggressively queer coded (Avigdor is falling for Anshel, Anshel is falling for Avigdor), all the while having the bioessentialist undertone that yes, men and women can be/are the same, except for their bodies – and the film even goes so far as to show pregnant and nursing women.

Bioessentialism is also present throughout the film as a fixation on body type, beards as an indication of maturity/masculinity, the expectation of men to eat more and women to serve and have children. Misogyny and sexism bleed into Anshel’s life post becoming Anshel, even as he becomes exempt from so many other facets of misogyny and sexism, much like queer and trans men are to differing degrees.

Anshel’s own relationship to women changes once he has become Anshel. When Yentl is with women in the beginning of the story, she has no interest in or respect for what women do for her. When Anshel meets Hadas, he instantly appreciates and notices everything she does, including the domestic chores he had disdained when they were expected of him. Moreover, Anshel tells Avigdor that men and women are equal, makes sure Hadas feels safe on their wedding night, and even teaches her Talmud.

Anshel’s fear of being found out keeps him from being physical with Hadas — he also might not be sexually attracted to her. When Anshel first travels with Avigdor, he is frightened by sharing a bed with him, whereas with Hadas, he is simply bothered by the concept of sex. He never tells her the truth, running away rather than share his reality with Hadas. The one person he does share this deepest truth with is Avigdor, and after confessing to him while away on a trip, Anshel departs, presumably for his safety. As of May 31, 2021, at least 28 trans people have been killed this calendar year in the United States alone, three of whom were trans boys/men, and to this day, countless LGBT and otherwise gender non-conforming people are killed worldwide annually. In the time Yentl takes place, the life Anshel was living was almost unthinkable. He tells Avigdor the truth for two reasons: because he wants a life with Avigdor, and because he doesn’t want to keep making Hadas suffer.

When Avigdor ultimately learns Anshel’s history, he is able to pledge his love, but only to Yentl. Anshel, it seems, had only been able to fall in love with a man as Anshel, not Yentl. The thought of love didn’t even cross his mind until becoming Anshel. Avigdor is too much of his yeshivish world to embrace Anshel as Anshel; he could only love Yentl if she conformed to their society. Avigdor has no choice but to set Yentl free.

Yentl continues to roam, but she goes back to being Yentl. There is a bird that Yentl/Anshel watches fly throughout the film, as a metaphor for freedom. The word for birds in Yiddish, feygelach, is also used as somewhat of a pejorative and/or term of endearment for a queer people. The last words of the film are “Papa, watch me fly” as Yentl leaves, seemingly for the United States, a place of refuge.

That desperation for freedom is not solely owned by trans people, or by cis women. It is a collective struggle against a patriarchal society. So I say, if Yentl empowers you to become a halakhic egalitarian, a feminist, a scholar, and/or to come out, whatever applies, more power to you. At the heart of Yentl is a story of someone being who they are meant to be, even in the face of people who don’t believe they can or should. That’s quite the uplifting message for pride.

Sandy Sahar Gooen is a Jewish, trans, multidisciplinary writer/artist/educator based in New York City. He can be found on Medium or on Twitter at @ftsgooen.