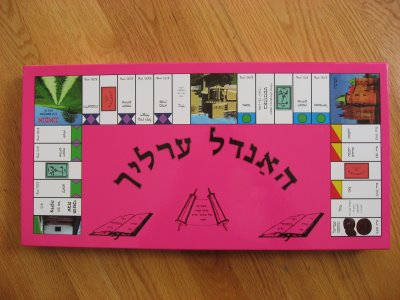 I was recently sent a link to a blog post about a Monopoly-style board game purchased in Hasidic Brooklyn called “Handel Ehrlekh” (“dealing ethically,” and/or “wheeling and dealing”).
Included in the game are a variety of “soul searching” cards, both good and bad. Some of the bad ones are pretty amazing:

The board has some important locations on it, including:

Don’t miss the “shtreiml gesheft” on the bottom center. The bottom left corner is a picture of the swirling hellfires of “Gehennom” (Hell). Continuing clockwise around the board, the box with the arrows at ten o’clock points to a second box called “Mikhutz Lamakhane” or excommunication (i.e. Kherem.) The text reads “Harkhek mekhover ra, keyner tor zikh mit dir nisht khavren”. (Stay away from a bad neighbor, nobody is allowed to act friendly towards you.) It’s not all about hellfire and excommunication, though. Sprinkled throughout the board are various Hakhnosas Orkhim (hospitality), tzedoko, and yeshiva/kollel squares.

The rules are evidently like Monopoly, except that there are a few changes:

Some of those are:
The oldest player plays first as a sign of respect.
While one who lands on a “wedding hall’ has to pay rent, he also receives a $50 stipend from charity towards “Hakhnosas Kale” (marrying off a bride).
There’s a “tzedoko” in addition to the bank. Every profitable transaction requires players to donate ma’aser (a tenth) of the proceeds to charity. Of course, if a player runs out of money, he receives charity. This results in the game being never ending, for, if you run out of money, you immediately receive a tzedoko (charity) stipend.
“Az es treft zikh un di tzedoko pushke iz shoyn leydik, makht der gabai tzedoko a groysn ‘appeal’ un yeder shpiler zol gebn khotsh $50. (Es farshteyt zikh tomer men hot.)”
If the tzedoko runs out of money, the adminstrator should make a giant appeal, and each player should donate at least $50 (if he has it).

Check out the whole thing here.

From Mourning to Teshuvah:  On the Distinction between Pain and Suffering