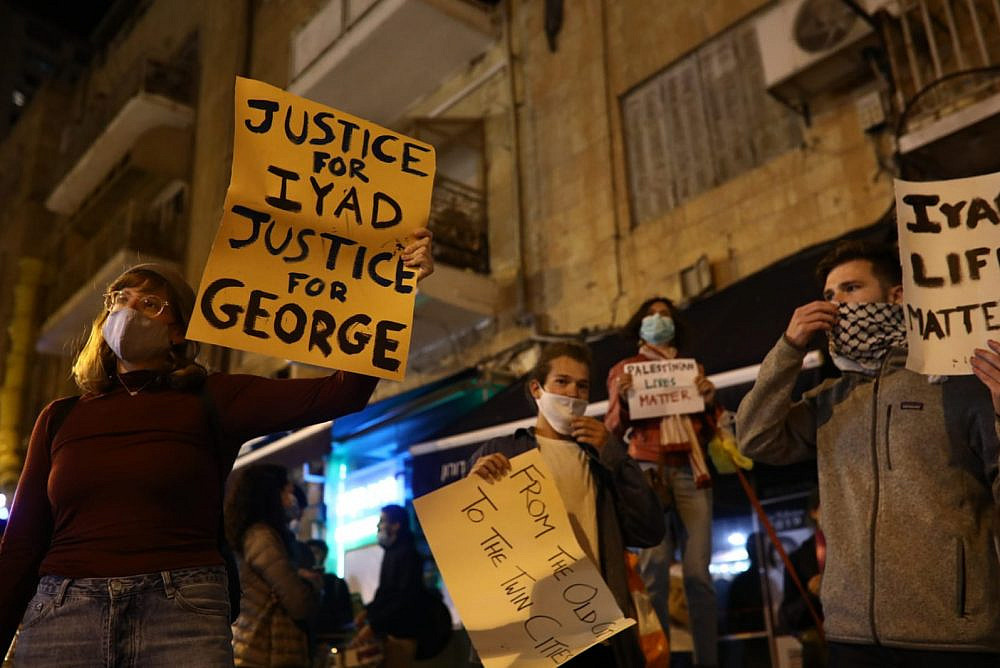 Protests have been taking place across the US over the last three weeks in response to the continuation of police killings of unarmed black people. George Floyd, a 46 year-old black man whose murder has been at the center of the demonstrations, was killed by Minneapolis police officers on May 25th. He was held down and suffocated by a knee-to-neck pin, or “conscious neck restraint,” for almost 9 minutes while pleading to the officers that he could not breathe.

Recent protests, as well as the Black Lives Matter movement, have issued  demands that range from police reform, defunding police departments, to the abolition of police entirely. Rooted in all of it is a vision to see the end of anti-black violence and police brutality in the US.

But in order for those visions to be realized, US police forces have to end their deadly exchange with, and stop receiving training from, the Israeli military.

Police departments across the US learn and implement law enforcement tactics and technologies from Israel’s military and police. In the city of Minneapolis, where George Floyd was killed, at least 100 Minnesota police officers attended an Israeli-led counter-terrorism training conference in 2012, which wasn’t the first of its kind. The conference was co-hosted by Israel’s Chicago consulate and the FBI. According to Shahar Arieli, an Israeli deputy consul, the conference session brought “top-notch professionals from the Israeli police” to share their knowledge with their US counterparts. (NOTE: It has not been established whether the officers specifically involved in George Floyd’s murder attended any of the trainings).

But it is in these spaces where the similarities and the relationship between the racialized and militarized nature of US and Israeli forces become visible. Human rights organizations like Amnesty International have not only reported on this widespread exchange between US police and Israel, but also the routine human rights abuses committed by Israeli military and police. Yet, for years, prominent institutions in the Jewish-American community “have paid for police chiefs, assistant chiefs, and captains to train in Israel and the Occupied Palestinian Territories.” These organizations include the Anti-Defamation League, the American Jewish Committee’s Project Interchange, and the Jewish Institute for National Security Affairs.

Amnesty reports that hundreds of law enforcement officials from across the US travel to Israel for training, and thousands of others get access to them through Israeli officials in the US. These trainings, which teach US police Israeli methods of crowd control, use of force, and surveillance, put “U.S. law enforcement employees in the hands of military, security, and police systems that have racked up documented human rights violations for years.”

Just five days after the death of George Floyd, Israeli police shot and killed Iyad al-Hallaq, a 32-year-old Palestinian man with autism. He was on his way to school when Israeli police suspected him of being armed when he was not, which led to them killing him due to that potential fear – a hauntingly familiar scenario for black people in America. Hundreds of Palestinians and Israelis have protested in Jerusalem in response, carrying signs that read “Justice for Iyad” and “Justice for George.” In response to these demonstrations, Israeli Public Security Minister Amir Ohana urged the public to remain calm, stating “we don’t need to import Minneapolis.”

Tragically, when it comes to the tactics that underlie “Minneapolis,” Israel has been both an importer and exporter. Indeed, both Israel and the US have imported and exported their techniques of policing that disproportionately affect communities of color. The deadly exchange isn’t just a one-sided operation. Israel has also adopted racialized policing policies that are prominent in the US, such as New York’s “stop and frisk” policy that disproportionately targeted people of color due to an association with criminality and danger.

But Israel’s racialized policing isn’t limited to the persecution of Palestinians. For years, Ethiopian and Mizrahi Jews in Israel have also protested against police brutality and racism in Israel that affects social, economic, and political life. While their place in Israeli society is not directly analogous  to Palestinians, because the Ethiopians are still Jews, they are nonetheless racialized as different from their Ashkenazi counterparts. People killed by Israeli police are disproportionately people of color, and similar to the US, there are rarely indictments for perpetuating officers.

While people like Professor Miriam Elman, from the US pro-Israel group Academic Engagement Network, have recently asserted that the notion any connection between these training exchanges and US police killing of black people is “ludicrous,” and “not based in fact,” this conversation has been taking place for years. During the protests that erupted in Ferguson in 2014, after the murder of Michael Brown, tear gas canisters made in the US were used against Americans in the streets as well as in Gaza during the Great March of Return. The same exchange continues today.

It is time to see all of these issues and struggles as interconnected and respond accordingly. If we mean Black Lives Matter, ending the deadly exchange between the US and Israel needs to be a necessary demand. As Americans support the various calls in response to police militarization and violence – such as reforming, defunding, or abolishing – it is also important to also extend that demand to the American government’s funding of Israel’s militarization. A first step in that fight would be to ensure this support is eliminated or conditioned by Congress, as it works to pass a $38 billion military aid package to Israel for the next 10 years.

We can’t struggle against one system and not the other – not when they are so intimately connected, and we remain the ones footing the bill for both.