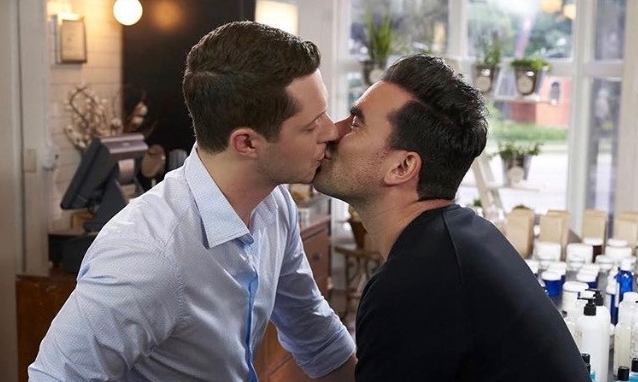 As COVID-19 begins to recede in the U.S., I, like many single gay men, have found myself on any number of gay dating apps swiping left and right in the hopes of finding Mr. Right (or Mr. Right Now). And while much of the online action involves  scrolling through an endless carousel of headless torsos, shirtless selfies, and photos of men holding dogs, cats, or in some cases babies (I don’t know whose), I actually enjoy reading people’s short profile descriptions as they tell potential matches that their hobbies/interests include eating food (my hobby is “breathing air”), lifting weights (see shirtless selfie), and spending time with family (again, photo with unidentified baby). While the narratives range from the pithy to War and Peace worthy, I’ve noticed one particular line coming up again and again. “I’m a David looking for his Patrick,” write many hopeful romantics. If these names don’t mean much to you, then you’re probably not familiar with the insanely popular and extremely funny Canadian sitcom Schitt’s Creek that in 2020 concluded six successful seasons, winning a bevy of Emmy Awards, Golden Globes, and other accolades along the way.

Schitt’s Creek focuses on a wildly eccentric, formerly wealthy, (half) Jewish family, the Roses, who decamp to a town that they happen to own called Schitt’s Creek when the family fortune suddenly disappears. While the show features top-notch actors across the board including veteran comedians Eugene Levy and Catherine O’Hara as Johnny and Moira, the family’s patriarch and matriarch, and breakout star Annie Murphy as their flighty daughter Alexis, the real scene stealer and perhaps heart of the show is David Rose, played by the show’s co-creator Daniel Levy (also Eugene Levy’s son in real life). Dressed in outfits that typically include black and white oversized sweaters, kilts, skinny jeans, and other pieces that would be more at home on a New York Fashion Week runway than in small town Schitt’s Creek, David (despite technically identifying as pansexual in the show) is the epitome of stereotypical over-the-top gay flamboyance. He hates physical activity, the outdoors, and sports and much prefers expensive facial products, shiny rings, and celebrity gossip.

While David comes off as “very gay,” one can also read him as embodying the long-existing stereotype of the effeminate Jewish man who also hates physical activity, the outdoors, and sports. Indeed, in my own search for a potential match, I often have a hard time when meeting a Jewish man for the first time figuring out if he might be gay or not as the nebbishy, slightly effeminate masculinity that many Jewish men project tends to be out of sync with the rugged butchness of the corn-fed non-Jewish American man. So in considering David Rose, it’s hard for me not to read his mannerisms and behavior also as manifestations of the neurotic Jew, a character that actors like Eugene Levy have made so familiar to audiences over the years.

As the Roses try to make themselves at home in Schitt’s Creek (they’ve taken up residence at the less-than-glamorous Rose Motel), in season 3, episode 8, David comes to meet a young man in town named Patrick (played by Noah Reid) whom he enlists for help with some paperwork as he attempts to open and incorporate an upscale boutique called Rose Apothecary. Fast forward a few episodes as we watch David and Patrick become not only business partners, but a romantic couple, their relationship confirmed with a sweet, soft kiss that David plants on Patrick. The kiss, not played for laughs as is often the case with gay male representations on screen, is a pleasant and welcome surprise, especially for the show’s queer viewers. It’s even more surprising when Patrick confides to David in that moment that he has never kissed a man before.

While in the real world, Patrick’s confession might have resulted in a case where Patrick disappears back into the closet only to intermittently hook up with other guys from Scruff, in the magical world of Schitt’s Creek, David and Patrick’s love only continues to blossom and evolve. It doesn’t matter that David is the only man that Patrick has ever known—he’s “the one” and in season five, the two become engaged, a plot development that culminates in the show’s season six series finale when the two get married.

In creating the show, Daniel Levy, who is gay in real life, said to GLAAD after winning multiple Emmys for the show: “we made a decision to not include the conversation of homophobia or bigotry on our show and by projecting a sweeter, gentler world, I feel like that was in a way a political statement.” Schitt’s Creek is moving and touching not only because its characters are so well drawn—I often found laughing one moment and shedding tears the next—but because it imagines a world that is devoid of homophobic violence, AIDS, and gay self-loathing. The show is groundbreaking in this way and rightly earned a number of LGBTQ awards, including multiple GLAAD Media Awards.

And yet, in all its brilliance and bright-eyed queer take on the world, the show inadvertently reinscribes an unfortunate act of wish fulfillment, one that is encapsulated in the oft-spotted phrase, “I’m a David in search of his Patrick.” For you see, Patrick, despite being gay, is very much David’s opposite. Clad in oxford shirts and chinos, Patrick is a foil to David’s queer Jewish persona; he is the earnest, straight-acting non-Jewish boy next door. He loves watching and playing baseball, enjoys going on hikes, and while he does possess a talent for music and theater (he plays the Emcee in the town’s production of Cabaret), is as unflamboyant as they come. It’s hardly a surprise when we learn that Patrick was even engaged to a woman at one point in his life.

While being gay is neither a liability nor a curse in the world of Schitt’s Creek, the show does deliver on a common trope of gay longing, one that is often undergirded by a sense of self-internalized homophobia: the desire to either be seen as straight or masculine, and if that’s not possible, then to find those qualities in one’s partner. In snagging Patrick, David lives out the fantasy of many gay men, especially those who are more effeminate, namely that they will walk off into the sunset hand in hand with a guy who isn’t too swishy. This obsession with masculinity is the reason why there are so many shirtless muscled torsos on gay apps; the chiseled bodies a response to a world that wants to cast gay men as “weak pansies” rather than “real men” (despite the fact that the current shape of most straight men is more dad bod than toned hunk).

In allowing David to snag Patrick, Levy achieves not one but two gay fantasies at the same time: the first in which the neurotic, prissy, over-the-top gay Jew can be who he is and still get the sexy straight-acting boyfriend who is both masculine and caring, and the second, a relationship in which the effeminate, non-toned gay man is seen as an object of desire. In this sense, Schitt’s Creek, is a bit less than cutting edge than it might seem at first pass, because while the overwrought David might be one half of the romantic couple, the show also suggests that men like Patrick are what gay men really want.

With profile after profile of men online looking for their own Patrick, this is clearly a case of wish fulfillment that many gay men want for themselves in real life. But in expressing their desire to find their own “Patrick,” these men inadvertently reveal their own hang-ups about what it means to be proud gay men. Patrick is a wonderful character and I would be very happy meeting a Patrick of my own. But to be honest, I sort of prefer David. He’s more interesting, funnier, and has way more style than Patrick. Yet in browsing through many online profiles, I only found one profile (my search was not exhaustive I’m afraid), in which the seeker stated that he was a “Patrick looking for his David.” In no case did I find a profile in which a “David is looking for his David.” That sort of representation is one that is still sorely lacking on screen. Two hot guys can fall in love, and a jock may even fall for a nerd, but no one wants to see two effeminate men in love; that’s just too much.

As we celebrate Pride this month, I’m glad that Schitt’s Creek exists. It’s funny, charming, and refreshing in its depiction of gay relationships, but I don’t need to buy into the collective wish fulfillment of the gay desire for the straight-acting gay man. I’m keeping my eyes peeled for my David, glittering rings and all.

Warren Hoffman is the Executive Director of the Association for Jewish Studies and the author of The Passing Game: Queering Jewish American Culture and The Great White Way: Race and the Broadway Musical. Learn more about him at warrenhoffman.com