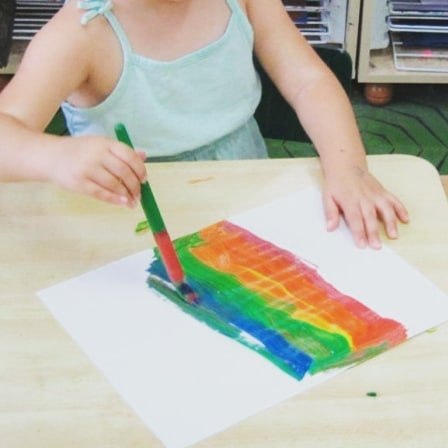 My teaching career began around the same time that I “officially” came out. I was eager to discover how children learn and develop, and at the same time, I was discovering more and more about myself.

During college, I was always curious about the connection between early childhood education and the LGBTQ community. I wrote at least three papers on the subject, and read countless articles about same-sex parents’ experiences in preschools, while constantly feeling a little rebellious because everyone else’s papers were about more mainstream issues.

So as I neared my college graduation in June 2018, I could not help but wonder: are preschoolers too young to talk about pride? Going by my recent experience with an incredible group of children, they are not, and when we bring it to the table, it’s a wonderful thing to be a part of.

A year ago, I was coming to the end of my third year working at a bilingual, Reggio-inspired, preschool in Tel Aviv. The school’s community is made up of different kinds of families; the majority are Israeli and Anglo secular Jews. There are also non-Jewish families, mostly in Israel for their jobs. We celebrated all of the major Jewish holidays, focusing on the values of them rather than the religious aspects. We also had our fair share of visits from Santa, class Christmas parties hosted in families’ homes, and learned about traditions which weren’t always familiar to everyone.

The Reggio Emilia Philosophy is an inspiring approach to early childhood education, which values children as strong, competent, and capable human-beings, full of knowledge and curiosity. Part of the approach is fostering the connection between children and the community and city around them. One of the ways we facilitated this in our school was by taking weekly trips around the streets of Tel Aviv to explore the people, places, and things our community had to offer.

The first week of June is one of my favorite times to do this. During that week, Tel Aviv becomes flooded with rainbows in preparation for one of the largest Pride events in the world, and the largest in the Middle East.

At school, I worked with the same class for two years, and it was during June of 2018 when I spoke to children about Pride for the very first time.

“Have you noticed any flags that have been put up this week?”, I asked them during our morning meeting.

“Rainbow flag!”, one of them shouted, and immediately the ‘Me too!’s’ began.

“On our tiyul [trip] we saw rainbow flags everywhere!”

I was curious, so I asked them if they knew what they were for. The consensus was that they were put up for some sort of celebration, but none of them could be certain of which one, so they decided to ask around.

They ran through the school asking whoever they could find, trying to figure out what the rainbow flag meant. Ultimately, that year’s kindergartners explained that it meant you could marry whoever you want and that it was your choice. When we got back to our classroom, my kids decided they wanted to paint their own flags, ending in different variations and creations of colorful stripes.

Fast forward to the following year, they were a year older and wiser. They remembered what they had discovered the year before, and we discussed the meaning behind the flag, and what it meant to be proud of yourself. They wanted to make sure that everyone was proud of themselves, so we decided to hang a flag together on the fence by the front gate of the school.

The next year (last year) I moved down in age groups as my class moved up to kindergarten. I still visited their classroom often, and when June came around and I heard they had started discussing Pride, I knew I had to be part of it.

When I walked in, they knew exactly why I was there. They began sharing some ideas that they had already discussed, and I reminded them of the ideas they had had the previous years. They agreed that it was okay for the boys in the class to marry each other, and likewise, the girls. And then I threw them a curveball.

“Do you know that there are people who don’t think that it’s okay?”

Suddenly there was silence.

It was Lia who finally broke the silence, exclaiming, “Everybody can marry everybody, cause everybody can ask! They can pick who they marry! A girl and a girl or a boy and a boy, just who they want!”

Rona stood up and agreed, stating, “That’s not right! Because you can’t tell someone who to love!”

I left their classroom blown away, and amazed at how simple this all seemed to them. Of course they could marry whoever they wanted. What was the problem?

That night, as I scrolled through the posts about civil unrest in America all over my Instagram feed, I came across Leslie Dwight’s poem titled, ‘What If 2020 Isn’t Canceled?’. Among the many things going on in the world at that time, Dwight’s words left me thinking about what impact I can leave on the world.

I paused. With everything going on, the world was such a dark place. It seemed that humanity was falling apart in so many ways. And sitting in my apartment in Tel Aviv, I couldn’t help but think, what was I doing to work for change? Then I remembered the conversation I had had with a group of six-year-olds earlier that day, and their words echoed in my head.

People always say children are innocent, and that is due to the fact that most of them have not seen or experienced the hatred that is in the world. In that moment, sitting and reading this poem, I thought to myself, it’s true, they haven’t, and what if they didn’t need to? Here is a group of kindergarteners who are so open and accepting of something that seems so natural to them – why can’t it stay that way? What adult in their future is going to change their mind, and why?

I know that no preschool teacher of mine at my Jewish school in the 90’s was having any conversation like this with me. I also know that the majority of public preschool teachers in Israel were not having this conversation with their classes that week. But I was, and right then and there I realized that that is what I was doing to work for change. I was making one of the first impacts on these children so that they can become the change.

I realized that if we, as educators, continue talking about love, tolerance, and acceptance, and shooting down ideas like “boy colors” and “girl colors,” and welcoming boys into our classrooms in homemade dresses and nail polish on their fingers, we are declaring change by telling young children that they can be exactly who they want to be, and love anyone they want. We can make this message clear early on in life, so that they can enter the world ready to take on everyone as they are, and be proud.

Miriam Lakin is an American-Israeli early childhood educator and a member of the LGBTQ community. She has been teaching preschool in different settings in Israel for the past nine years and recently moved to the US to expand her teaching career.