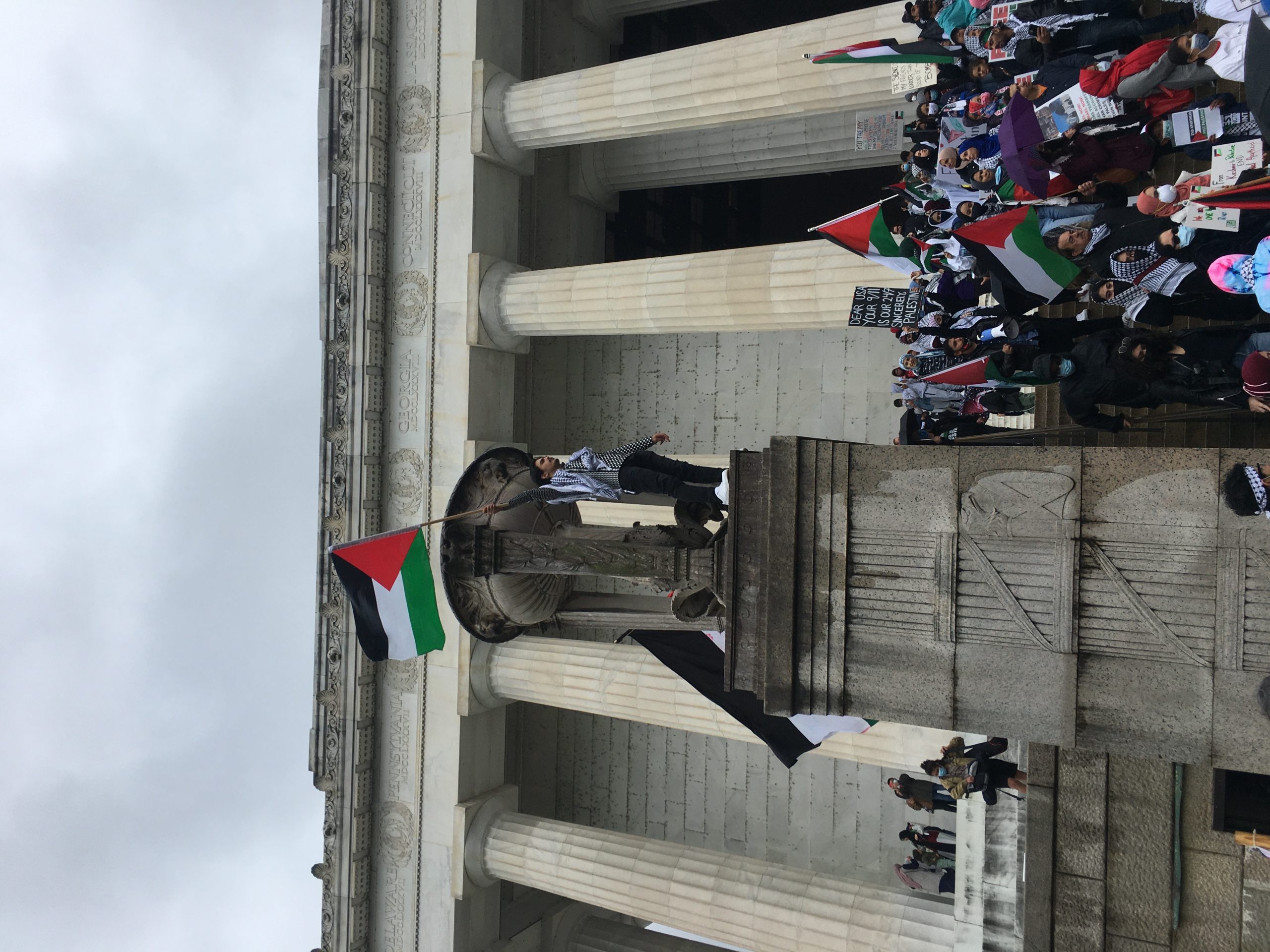 “Let me tell you a quick story,” Maram said. “My grandfather’s family was from Yaffo. They were pushed out of their home, and he kept the key. He gave it to his older son when he died. But he never forgot that, when he was little, his parents would leave him to be watched by their Jewish neighbors. They coexisted together.

“This conflict is portrayed as religious or ethnic, but what was peaceful coexistence was hijacked by a colonialist effort. We need to get back to coexistence.”

Maram, who traveled from Florida to Washington DC for the May 29 March for Palestine, also told me about his cousin in Gaza, who had just graduated from high school and planned to study to be a doctor. Then his home was struck by an Israeli missile during the recent fighting, and although he is alive, those plans seem unlikely to be fulfilled. It is not right and not just, Maram bemoaned, and it is that level of injustice experienced every day by Palestinians in both Gaza and the West Bank that creates continued violence against Israel.

Maram’s sentiments, though stated more eloquently and with more direct familial tragedy than most I spoke with, reflected much of what I heard from others. I attended for the purpose of engaging attendees on why they came, what they hoped for, and where they saw the future going. I asked questions that I had crowdsourced from a Facebook group of Jewish participants from across the country, indeed the globe, with a wide array of perspectives and experiences.

Whither the 2-State Solution?

My aim was not pretend to be a journalist, which I very much am not, but rather to be something of a bridge for conversations between communities that sadly seem to me to remain lacking, even (or, perhaps, especially) in the era of social media, when reaching new and different people has, at least theoretically, never been easier. The recent Clubhouse experiment of Israelis and Palestinians talking together in a virtual room is just one important example, but perhaps serves as the exception that proves the rule that we do not truly and honestly talk to those we disagree with as much as we should, though we may yell at and troll them plenty. Talking with people at the March reminded me that it will take more of this face to face discussion to move anything forward. Certainly by the political and diplomatic leadership that all sides so desperately need, but by everyone who is connected to and cares so much about this conflict as well.

Political and diplomatic leadership is desperately needed because one notable reflection I heard was that there is no sense of viability for a 2-state solution. For attendees Tarek and a friend, who had also traveled from Florida, it makes no sense anymore. “There is no point to discussing the 2-state solution. Stop the problem and end the violence and suffering first. When Palestinians have a right to live, to not be kicked out of their homes, to pray at Al Aqsa in peace, then we can talk about solutions. But where will the Palestinian state come from with the settlements? You can’t take over land, deny Palestinians access to resources and their right to live, and not expect resistance. But the media only covers violent Palestinian resistance like Hamas rockets. When Palestinians march nonviolently, it is not covered, especially when Israeli soldiers react with force to break them up. We cannot judge Palestinians for resisting.”

Another attendee, in his mid-20s with roots in the Middle East, reiterated this point. “There should be a single state with full rights, full ability for Palestinians to be in their homes and have self-determination.” When I asked about the concern that many Jews feel about what their fate would be in such a state, he came back to the idea that a single state must focus on the rights for all people and that Jews would not be targeted. In response to a question about the poor treatment Palestinians receive in other countries or Egypt’s own blockade of Gaza, he came back to the fact that the onus is on Israel first and foremost. 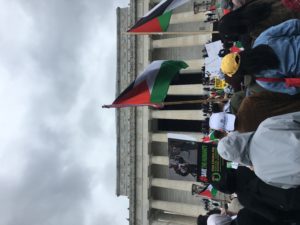 Fatimah, for example, reflected on her father’s and her own experiences. Her father is from East Jerusalem, and she lived there as well for a time (she now lives in New York and works within the Jewish community). She recalled praying many years ago on the Temple Mount when the Israeli police provoked worshipers at Al Aqsa, but only the response by Palestinians was reported on. She talked passionately about the violence experienced by Palestinians and said no 2-state solution is possible because of settlements but then turned more directly to the core need for Israel to respect the rights of all people. “I saw the way they treat Ethiopian Jews, how substandard it is. There is so much rhetoric and hypocrisy, but more voices are being heard, including from the Jewish community, and when the US stops funding this regime, things will change.”

In the end, attendees I spoke with focused much more on rights than policies, on justice more than politics. They were less focused on the ultimate details of a resolution than the immediate need for recognition and respect for the civil and human rights of Palestinians to live their lives free from Israeli violence. They understood the concerns of Jews and Israelis in light of what Hamas’ words and actions have been over many years, but they focused instead on the idea that Jews would not suffer in any future single state if that state is first and foremost rooted in respect for the rights of all. They see Hamas as a justified form of resistance, often noting the role that Israel played in creating it, but not necessarily the future of governance.

This is About Israel, Not About Jews

One adjacent note to concerns about Hamas is that everyone I spoke to was quick to distinguish between the Israeli government and its actions on one hand, and Israelis or Jewish people more broadly on the other. Although no one mentioned recent antisemitic attacks, all felt it important to point to that distinction. Minah, for example, a young woman from the East Coast reiterated what I had heard from Maram. “It’s not about religion. It’s not about any hate toward Israelis or Jews. It’s about opposing Zionism.”

Antonio, originally from Europe but now based in New York, made the same point. He joined Black Lives Matter marches last year and decided to join the March for Palestine this year out of a similar sentiment of support for justice and human rights. Antonio sees the Palestinians as rightly and justly resisting to fight for their basic rights but was also quick to reference problems with Hamas and the PA, whether arrests of people for besmirching the memory of Arafat or for indiscriminately attacking Israelis. But he does not view two the sides as equal, and when he commented that he sees many Israelis and Jews speaking out, he asked, “Are these people antisemitic when they themselves are Jewish?” When I explained that this is indeed often how they are characterized, and that I myself have been labeled that way and as a “kapo,” he seemed surprised and saddened. “It’s not about hating Jews or denying them rights. BLM does not mean you are taking away rights from white people, and it is the same in this case.”

Doing the Work to Find Hope

At the end of our discussion, Maram, whose grandfather from Yaffo taught him about coexistence, told me that he’s taking hope of late from the increasing number of Jews he sees speaking out against Israeli government policy. That is how he sees American Jews being allies: by acknowledging what is happening. Tarek and his friend from Florida asked members of the Jewish community to make sure they have spoken to Palestinians, that they hear the Palestinian experience. That they focus on humanity and decency and be willing to answer whether they truly believe Palestinians have full rights as humans.

It was often hard to hear, literally and figuratively, these heartfelt and thoughtful discussions amid the chants of “Israel is a Racist State” or “From the River to the Sea, Palestine Will be Free.” Even the theme of the March — #SanctionIsrael — put me on my heels to some extent, as did many signs focusing on sanctions for Israeli “terror.” As an American Jew who has long opposed the Occupation, I was conscious of feeling like an outsider here, even as I often do in my own community.

The experience did leave me realizing, again, that while these types of marches are perhaps necessary to unite people together for one reason or another, just as we can say is true for some activity on social media, we mostly need to get back to talking to each other. To those we disagree with, especially, both within our communities and across the divides. That means we need to acknowledge each other’s pain, as I reflected on recently, and be uncomfortable. Even angry.

But when we do that while in conversation and relationship, rather than just yelling at a handle or meme online or recoiling at a crowd’s chant, then progress is possible. We may need organizations like Resetting the Table to do more work with us than ever, but if that’s where our energy and money goes, then I think we can find a new way ahead. It is slow and hard and certainly not linear, and it is somewhat hard to fathom this is still where we are after so many decades and so much attention and money spent, but that’s what stood out to me more than anything else.

In the end, if Maram can find hope for coexistence after his grandfather’s displacement in 1948 and cousin’s recent life-altering injuries, then I think we all must find a way to do the same.