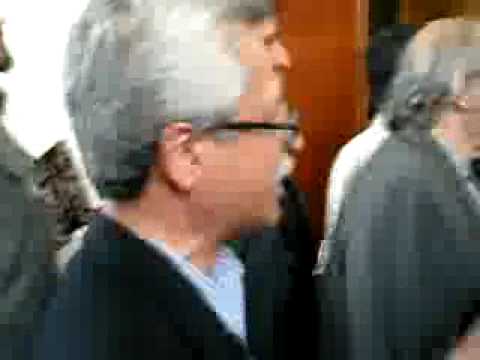 This incident struck me deep in my heart, as “Zio-Nazi” was the same slur my ‘friends’ donned upon me during the second Intifada. At the time I was a proud pro-peace Zionist, but simply advocating the existence of a Jewish state was too much for my ‘friends’ to handle once the intifada began. That incident caused me to re-evaluate the political relationship between Jews and the far left, between Israel as a political entity and Israel as a “state for the Jews” and the conflation that happens, in our mind and in the mind of our detractors (both anti-Semites and valid critics of Israel) between Jews in the diaspora and Israel. I think we need to work hard to make a separation between the two. If we can make that constructive separation, maybe we can begin to listen before we react. For example, Ahmadinejad has never once threatened world Jewry, to the contrary has voiced his support for the Jewish religion while making loud, public threats against political Zionism. Is that inherently anti-Semitic? I don’t believe so. Many call me naive, but I don’t see a risk of a second Shoah coming from this ego-maniacal little tyrant. I believe Israel’s insistence that Iran not achieve nuclear capability has more to do with power brokering than it does with any existential threat. If Iran’s supposed main concern is the Palestinians, no nuclear weapons are heading Israel’s way. There’s no way to send a nuclear missile to Israel and not kill most of the Palestinians too, not to mention some of Islam’s holiest sites.
Now, in my personal opinion, and I know many will disagree, I did not find Ahmadinejad’s speech anti-Semitic or racist. Intolerant, ignorant and arrogant, for sure, but not racist or anti-Semitic. This video, on the other hand, I know no other way to interpret. If these people were shouting such slurs and the Israeli head of state, FM or DM I would no condone it or agree with it, but I could understand it. But what does Elie Wiesel have to do with the occupation of Palestine? Here is a Nobel laureate who has traveled the world advocating peace and an end to genocide. He does not live in Israel, nor to my knowledge does he regularly make public and contentious political comments about Israel. Is there any way to interpret this other than anti-Semitism, racial hatred and intolerance?