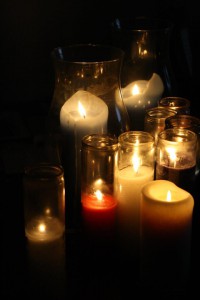 One of my best friends went dark when Hurricane Sandy crashed into the States. I kept her Twitter and Facebook open, vainly hoping for an update. Pushing refresh on her pages. Checking my text messages, voicemail, e-mail. Anything. I couldn’t think of a good prayer. I said the Sh’ma, to reassure myself. To remind myself of holiness even in a very scary, terrible, fearsome time. When she called Wednesday, I cried. She was unharmed during the storm, but had been without power and any way to contact the outside world.

The aftermath of Sandy is everywhere, including the Jewish press. JTA’s been liveblogging Hurricane Sandy and the aftermath. JD Forward’s done some stuff already. Torah scrolls have been damaged, mezuzot retrieved from who knows how many doorways already. And only G-d knows how many have been destroyed or lost in the storm.
Homes were destroyed. Places of worship. New York and New Jersey and Staten Island and Coney Island are just a few of the places that got hit. A part of the places the dead of Hurricane Sandy called home.
I’ve never been to Haiti,Jaimaca, Cuba, the Bahamas. They were hit. Death tolls and damage numbers are things that stretch—and they never seem to go down. Only up.
I know you’re aware of places you can donate money. That you are smart enough to vet relief funds on a basic level so you know your money is going to where the need is.
I know not all of us are on east coast. Or even in the States. But giving aid, comforting the sick and dying, doing right by the people around us. Those are Jewish values. I’m a big believer in prayer, and hope. In doing what you are able to, and to the best of your ability. I expect no one to give more than they can, and if you look at the tradition of charity, we are not to give so much of ourselves, particularly monetarily, as to beggar ourselves. But we live in a modern era.
Money is not the only thing we have to give.
Ask other people to give a shit—and to get together with you to help.
Write an e-mail. Send a text. Pick up a phone. Follow an east coast newspaper on Twitter, or Facebook, and keep up with what is going on right now, on what is going on months from now—and  how much or little has changed. Join the conversation and become knowledgeable about the scientific, fiscal, and cultural issues that must be faced.
Do whatever it is you are good at, that you can give of yourself, to help the people left in devastation’s wake. Most importantly, do not harden your heart to this. Don’t just let Hurricane relief become something you let go of, like a trend.
Do one thing, one real thing, to help.
You start in whatever way you can, in the Jewish community, outside of it, whatever place you can take the first step to act with compassion. Ask for donations, cook meals, give blood, find ways to put people with money or resources in touch with the people who need them so much right now.
And after that first step, you don’t stop walking. If you have never been involved with tikkun olam, or if you think it’s dumb to say hurricane relief helps repair the world, I’m asking you to consider something.
When we rebuild a city, we rebuild the spirit and hearts of its inhabitants. If we aid them rebuild, and do not harden our hearts to their voices, we have started to understand what it truly is to repair the world.

2 thoughts on “Endeavor to Repair”