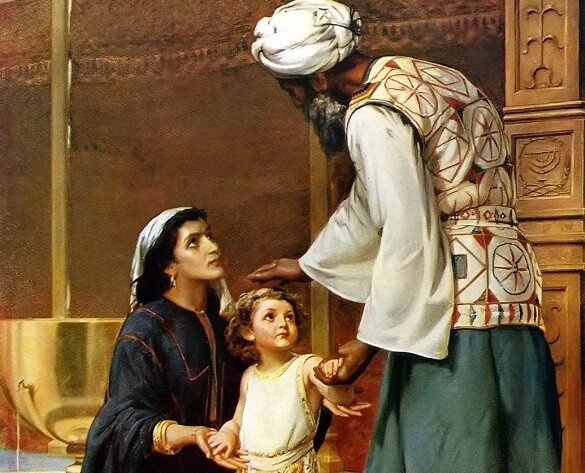 The author is a Jewish foster parent.

I have been a foster parent for two and a half years. While it isn’t my place to tell my foster son’s story, no child comes into foster care except through tragic and traumatizing events. My own choice to become a foster parent meant choosing to be a mother to a child who would always have another mother, and who I can expect to always feel pain and anger at the events that took him away from his first mother and brought him to me.

In 1 Samuel 3, the young future judge Samuel hears a voice in the middle of the night:

Young Samuel was in the service of the LORD under Eli. In those days the word of the LORD was rare; prophecy was not widespread. One day, Eli was asleep in his usual place; his eyes had begun to fail and he could barely see. The lamp of God had not yet gone out, and Samuel was sleeping in the temple of the LORD where the Ark of God was. The LORD called out to Samuel, and he answered, “I’m coming.” (1 Samuel 3:1-4, NJPS)

Samuel doesn’t know whose voice it is, so he goes and asks the priest Eli, whose home he is living in.

When Samuel hears a voice at night he assumes it is Eli’s so he asks him about it three times until Eli explains that it is God’s voice and teaches Samuel how to respond to it.

Last year, when my foster son was retelling the story, he said that when Samuel heard the voice he went to talk to his dad. I wondered if I hadn’t been clear. We had learned together the story of Hannah and how Samuel was born. Had my foster son not understood that Hannah and Elkanah were Samuel’s parents? And then I realized that I was the one who didn’t understand, that actually I had never understood the story at all. From the perspective of my foster son, of course Eli is Samuel’s dad. Eli is the one that Samuel goes to when he is frightened in the middle of the night.

There are approximately 400,000 youth in foster care in the United States. Many have been in more than one foster home. Foster children address their foster parents in different ways, but, for many children in foster care, mom and dad are whoever they are with right now. They may have many people in their lives that they call mom and dad: their first parents and all the foster parents they have lived with.

Hannah first met Eli in the first chapter of 1 Samuel, when Hannah went to the Temple to pray for a child. After Samuel was weaned, Hannah sent Samuel to live with Eli (1 Samuel 1:24). But that didn’t mean she gave him up. She visited him every year, bringing with her a little robe that she had made for him (1 Samuel 2:19). We don’t know what happened in that relationship as Samuel grew, or what role she had in his life. But if, as the Talmud suggests ( Bava Batra 14b), Samuel was the author of the first part of the book of Samuel, we know that he began to tell his own story by telling Hannah’s. He writes of her prayer and her longing for a child.  By writing the story this way, he acknowledges that he is the child that she longed for, and any relationship that he has with Eli won’t change that.

But for Eli, young Samuel was also an answer to a kind of prayer. Eli had children of his own, but they were grave sinners, who stole and who abused women who came to the Temple and who did not listen when Eli rebuked them (1 Samuel 2:12-17, 22-25). Out of all the children that Eli raised, Samuel was the only one who learned how to listen to God in Eli’s home.

The foster system can be a place of injustice. Parents can lose their children to foster care because of poverty or addiction, and even in cases where there is a legitimate reason for the child to be placed in foster care, children still miss their parents and suffer from the trauma of being separated from them. Samuel grew to speak against injustice, and in particular against separation of families. When the people ask him for a king, he warns them of what might happen:

This will be the practice of the king who will rule over you: He will take your sons and appoint them as his charioteers and horsemen, and they will serve as outrunners for his chariots. He will appoint them as his chiefs of thousands and of fifties; or they will have to plow his fields, reap his harvest, and make his weapons and the equipment for his chariots. He will take your daughters as perfumers, cooks, and bakers. (1 Samuel 8:11-13, NJPS)

This is how Samuel begins one of the strongest speeches against monarchy in the Bible. He opposes kingship for many reasons in that speech, and predicts that the king will cause so much harm that people will cry to God. But the first reason he gives is that the king will do harm by taking children away from their parents, even though the king is taking these children to do jobs that might be high-status or powerful or otherwise unobjectionable. There is nothing wrong with being a cook or a chief of thousands, but there is something very wrong with children being separated from their parents. Samuel’s description of the king taking children echoes his own childhood, sent away from his parents to live with Eli the priest.

But Samuel may have had other reasons to oppose the monarchy, beyond the injustice that kings could do. Kingship is inherited biologically, but Samuel’s own life story is one of non-biological inheritance. Samuel was Eli’s true successor in a way that Eli’s own biological children weren’t. If Eli had been a king, he would have been succeeded by his corrupt and abusive sons. Instead he was followed by Samuel, who had heard the voice of God in his home.

Later on in the book of Samuel we find the story of how David became king and the covenant that God made with David and his biological descendants forever:

When your days are done and you lie with your fathers, I will raise up your offspring after you, one of your own issue, and I will establish his kingship. He shall build a house for My name, and I will establish his royal throne forever. I will be a father to him, and he shall be a son to Me. When he does wrong, I will chastise him with the rod of men and the affliction of mortals; but I will never withdraw My favor from him as I withdrew it from Saul, whom I removed to make room for you. Your house and your kingship shall ever be secure before you; your throne shall be established forever.” (2 Samuel 7:12-16, NJPS)

Michael Wyschogrod in his book The Body of Faith writes about God’s election of the Jewish people as an eternal covenant with Abraham. God fell in love with Abraham, Wyschogrod writes, and sees the face of his beloved Abraham in every one of Abraham’s descendants. For Wyschogrod, Jewish peoplehood is a biological covenant, inherent in the Jewish body and transmitted through Jewish families.

This beautiful image of the eternal Jewish family can only be enriched by recognizing different ways that families can be formed. The story of David and his descendants is not the only model of family that the book of Samuel gives us. Samuel is part of Eli’s family not because he shares his face, but because it was in Eli’s house that Samuel first heard the voice of God.

The Jewish family is complicated. People come to it in different ways and for different reasons. We don’t all look like each other and we aren’t all Abraham’s biological seed. But when we imagine the Jewish people as a family, we can think of diverse kinds of Jewish families, including foster families like mine. When we think of God as a parent we can think of different kinds of parents. Maybe God is a foster parent, too. Sometimes the Jewish people can feel like a foster family, with all the complications that go along with that. But if it is, the beginning of the book of Samuel shows us that a foster home can also be a place where God’s voice is heard at night.