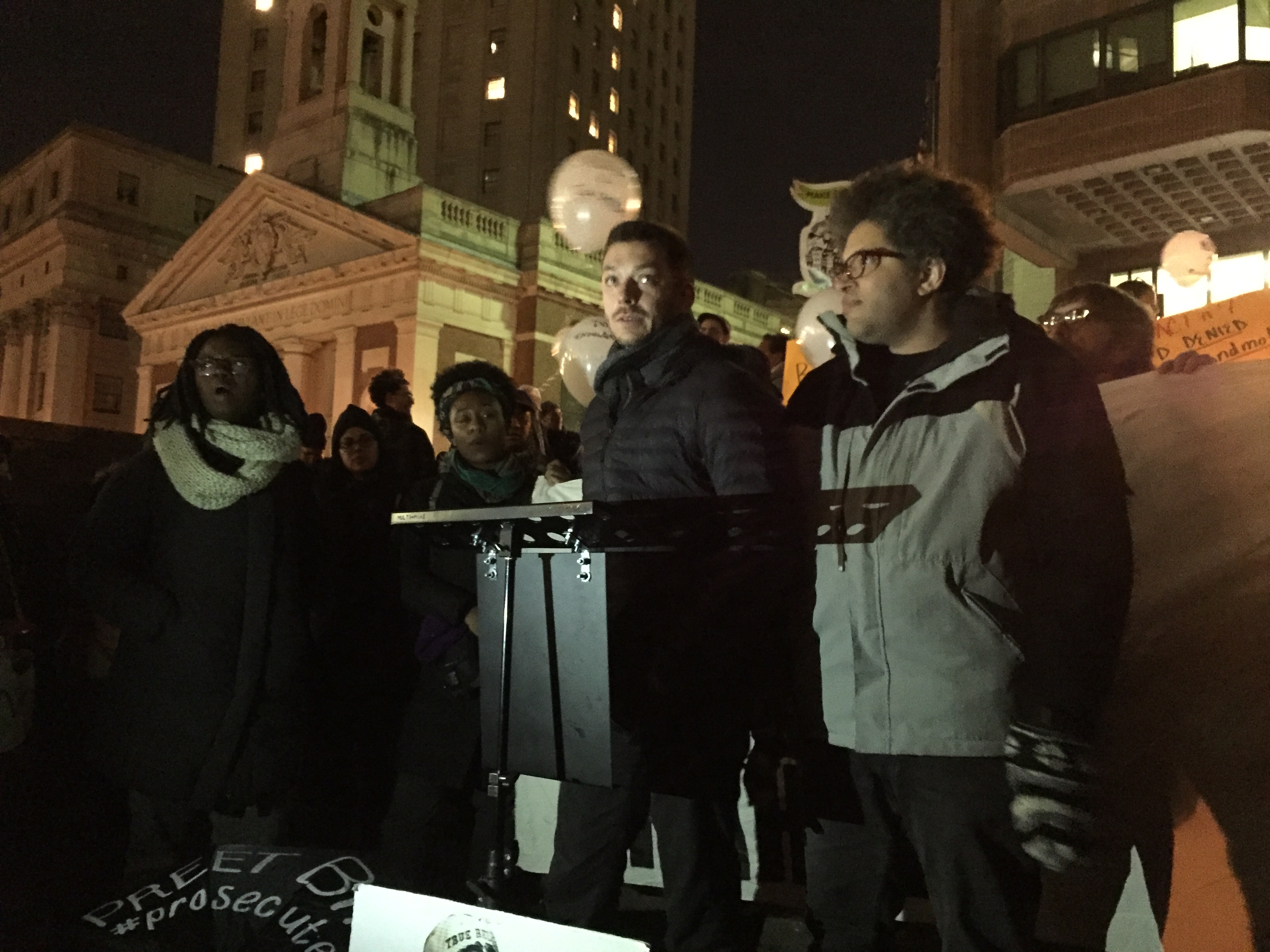 How My Jewish and Black Grandmothers Found Bernie

Photo above: Jason Salmon (center) and members of Jews for Racial and Economic Justice (JFREJ) at an action in New York City for police accountability. Photo courtesy JFREJ.
Both of my grandmothers, one a Black woman and the other an Ashkenazi Jewish woman, recently became ardent Bernie Sanders supporters. They don’t articulate their passion like most of the younger supporters by saying, “I feel the Bern,” but they realize that in order for their grandchildren to reap the benefits of their hard work and contributions to society, whether social or economic, systemic change must happen. They grasp that they can’t subscribe to the status quo any longer.
[pullquote align=right] We are all, to some extent, prisoners of America’s past, but they feel its impact in ways I cannot.
[/pullquote]Like many of the older generation who came from marginalized groups, my grandmothers are weighted down by the past and the oppression they experienced first-hand, while living through the Great Depression and segregated America. We are all, to some extent, prisoners of America’s past, but they feel its impact in ways I cannot.
At the beginning of election season both were in favor of Secretary Hillary Clinton. So what changed their minds about Bernie Sanders? Why is he no longer a “dreamer” as my Jewish grandmother initially labeled him? And why is my Black grandmother no longer influenced by the Clinton’s longstanding connection to the African American community?  Why have these two women, in their ninth decade of life, veered from the expected? I believe I had a hand in this.
Both my grandmothers had unexpected additions to their families. A son-in-law not white and a daughter-in-law neither Black nor Christian, capped off by a grandson, good ol’ me, with his foot in both communities. Broadening the conception of family has been slowly, but irrevocably, gaining traction across the nation.  According to the 2010 Census, Americans self-identifying as belonging to more than one race grew by 32 percent from 2000 to 2010. A 2010 PEW Research Center Report, “Marrying Out” found that one in seven new marriages were between people of a different race or ethnicity. The result: a growing wave of younger people who blur lines, speak across the racially constructed divides, and who can potentially pull the older generations into reconsidering what is needed to secure a better future.
[pullquote align=left] A lot of JOC’s and multi-racial people in general grapple with their identities.
[/pullquote]Ok, now let’s get back to the grandmothers who I love dearly. Could it be that watching me navigate the Black and Jewish communities gave them a different perspective?  Seeing a vision of what might be if only they would step outside their comfort zones? Perhaps this is what pushed both my grandmothers into the Bernie camp.
It’s no secret that the history of African Americans and Jews in this country has been bitter sweet. I believe the seeds, which splintered that relationship, were planted in 1948 when the GI Bill was passed. The GI Bill helped create the largest middle class ever to exist, but left out African Americans. We were denied those benefits, which catapulted whites into the middle class. Though Jews were the low man on the White Totem pole, we still received those benefits. We became economically and socially invested in the “American Dream”. Many Jews lost their sense of struggle; little by little leaving it behind.
A lot of JOC’s and multi-racial people in general grapple with their identities. We feel we’re alone on an island. Of course, once in a while, someone docks their boat and comes to hang out for a bit, but by nightfall, they hop back on their boat and paddle off. Recently, I came across a blog post headlining “Celebs you didn’t know are black.”  Intrigued I click through the posts.  No kidding? Wentworth Miller from Prison Break is black. Go figure. For a second I don’t feel so alone and then, a minute later, I step outside and that feeling fades. The JOC convening will provide so many Jews of Color a sense of community.
[pullquote align=right] We all have our complexities to mull over, but we need to recognize that Jews of color have been given a gift.
[/pullquote]I’m the kid who grew up a few short blocks away from the late great Notorious B.I.G, and traveled outside of my neighborhood to Eastern Parkway to attend Union Temple. I’m the kid whose Bar Mitzvah attendees were comprised mostly of African Americans. I’m the man who during the same summer of Eric Garner’s tragic killing attended his childhood friend’s funeral who was also murdered by the police.
But here’s the deal: while we all have our complexities to mull over, at the end of the day, we need to recognize that we have been given a gift.  This cultural blend affords us a unique insight into the threads of oppression that pulse throughout our society.  We have an opportunity and a platform to reach others regarding issues of human rights and equal justice, civil rights and voting rights…all those things that have bedrock importance in a truly free society.