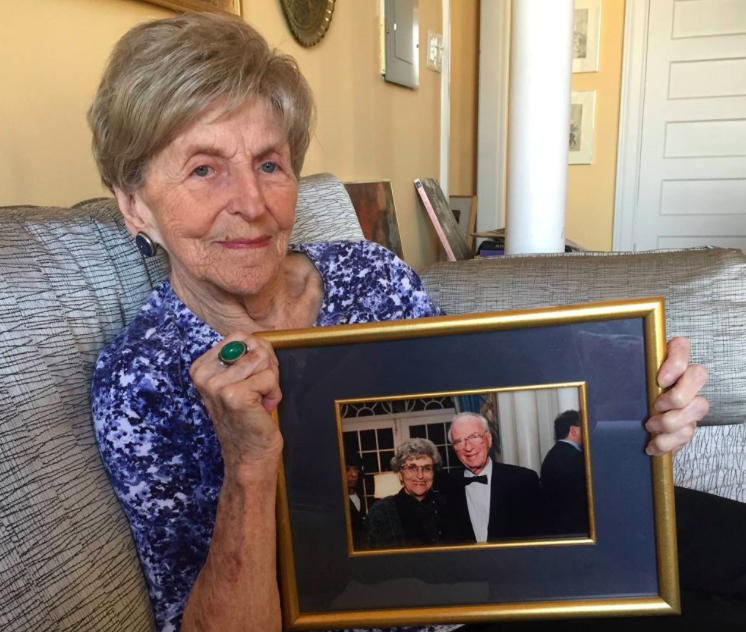 She then went to  the movement’s Camp Kvutza in upstate New York. She describes meeting an 11-year-old boy who said to her, “Havera Sara, can you describe dialectical materialism?” Interestingly, that was “sort of the level of the discourse of the kids.”
At camp, she came to know two Jews who lived in Palestine, who had a profound impact on the trajectory of her life. One was Enzo Sereni, an Italian Zionist and co-founder of Kibbutz Givat Brenner. After parachuting into occupied Europe during World War II, he was captured and murdered at Dachau. The other was Leon (Ari) Lashner, who was killed by a sniper in the Galilee in 1948. She felt “profound sorrow coupled with profound respect for these two men who had died so tragically in their young years.”

Ehrman’s father was not supportive of her activism. “She’s a goddamned communist,” he would say. Ehrman would reply, “I’m not a communist. I’m a Zionist.” Then he would retort, “it’s the same goddamned thing, and I want you to cut it out and do your homework.”

On her first trip to Israel in 1959, Ehrman met her husband’s sole living relative, a cousin. She describes visiting the Jerusalem office of Teddy Kollek, who would later become the city’s mayor. The office was right across from the Old City. “You could see the Jordanian Legionnaires with their rifles and, you know, it brought the conflict very close to home.”
Ehrman ceased her Zionist activism after she got married to a man with “no interest in Zionism,” but reconnected with the movement after meeting her neighbor Isaiah Leo “Si” Kenen at the birthday party of one of her children. Kenen was a journalist, a Labor Zionist, and founder of the American Zionist Committee for Public Affairs (AZCPA), the forerunner of AIPAC (American Israel Public Affairs Committee).
In 1979, Ehrman spent a month in Jerusalem, where she met with a group of Shalom Achshav (Peace Now) leaders including Tzali Reshef and Galia Golan. She told them, “If you want to work in the States, you account for absolutely nothing, nada, unless you have a lobby office here in Washington, D.C.” About a year later, Dan Gordon, an American who had made aliyah, opened a Peace Now office in Washington, DC. Ehrman helped found Americans for Peace Now (then known as Friends of Peace Now) with Mark Rosenblum in 1981. She served as an active board member with the group for the rest of her life. “It is now a fully expanded Washington office with very professional people and a very fine reputation in the White House, in the State Department and on the Hill.”
In 1980, Ehrman began working at AIPAC as a lobbyist. “I didn’t know much about AIPAC and I was interested in the issue.” Over the course of her five year tenure, she rose to the position of National Political Director.

She reconciles the different political missions of AIPAC and Peace Now as “strange, but all for the same cause: for a strong Israel.”

Ehrman learned a lot about political organizing at AIPAC, because it is “the most sophisticated political Zionist organization in the country.” She learned from both of the men who supervised her: first Morrie Amitay, “who was a right winger,” and then Tom Dine, a liberal Democrat. “We sat down with the map and decided where we were most needed. We went to the field in the middle of the country, and not just the Northeast, Los Angeles and Miami.”
Ehrman helped build AIPAC’s nationwide network of pro-Israel advocates. She recalls her strategy during a vote on arms sales for Israel: “Give me a credit card and I’ll move to Texas where I will find an active Jewish voter in every one of 27 congressional districts to form a network and do political grassroots activity, because that’s the only way you’re going to get anything through.” She recruited people who would reliably call their Senator or Representative to request that they vote in line with AIPAC’s recommendation. “That’s how we began the process of real grassroots organizing.”
After serving as the deputy Political Director of the Democratic National Committee during Clinton’s first term as president, Danny Abraham, co-founder of the S. Daniel Abraham Center for Middle East Peace, approached Ehrman about bringing her skill set to working for Israeli-Palestinian peace. As she recalls, he said, “‘So, I’m a Jew, and I’m for Israel, and I want to get involved in the Democratic Party.’ He offered me a job with his think tank.” She eagerly accepted a position as the Center’s Senior Policy Advisor. That was the beginning of a twenty-year-long relationship.
In her new position, Ehrman organized numerous Congressional missions to the Middle East. Then Middle East Peace Center president, former Representative Wayne Owens believed “we had to travel throughout the Middle East talking about a way to achieve peace between the Palestinians and the Israeli government…We traveled from Algeria to Oman and every country in between…and we brought members of Congress with us. They met face-to- face with the heads of state of adversaries of Israel including the Prime Minister of Algeria and the King of Saudi Arabia.” They also had frequent meetings with “Yasser Arafat and his people until he died,” and Israeli leaders from Rabin to Bibi Netanyahu, “and everything in between.”
Ehrman recalled those trips as the most satisfying time of her professional life. As Americans traveling with members of Congress, they had access to meeting “face-to-face with adversaries of Israel” and “entree to the highest level, including frequent meetings with the heads of government of Israel and of Palestine.”
Ehrman recounts one meeting with then Prime Minister Bibi Netanyahu: “Apparently there was an article in the Israeli press that expressed some concern about the relationship between Hillary Clinton and Bibi Netanyahu… He came in, slammed his hand on the table, and he pointed right at me and he said, ‘You name me one day that I talked against Hillary Clinton.’ I didn’t say anything. Then he turned to a member of Congress who was with us and he said, ‘You tell me who would you rather buy a used car from, me or Yasser Arafat?’…The congressman said, ‘I’d rather walk.’ And everybody burst out laughing.”

“Did we accomplish anything? We made connections. Did things change as a result? I’m afraid not, but it was action. It was not just sitting and making speeches on the floor of Congress. It was talking face-to-face with heads of state. So, I’m all for that kind of trip — that kind of negotiation — and I hope it resumes in my lifetime.”

It was against the policy of most of the Arab states “to recognize Israel as a sovereign state and to begin to negotiate.” But the dialogue that had begun continued in Washington. “You have to keep talking,” said Ehrman.
Ehrman met with Arafat frequently, but the meetings “came to nothing.” In 2003, just after Israelis intercepted arms bound to the PLO, she recalls saying to Arafat, “President Arafat, you promised us that there would be no further importation of arms.” His response: “‘Ah, dear lady, I have a gift for you.’ And he brought me a Palestinian shawl. It was after that that he left and went to Paris where he died in 2004. It was very sad and very infuriating because in the end he was his own worst enemy.”
According to Ehrman, the Center for Middle East Peace is “very highly regarded on the Hill. We do not have membership. We have experts. We have access in the White House and in Congress. We have their direct dial numbers in our office and they have ours. And that’s the way Washington works.”
Ehrman believes the situation has not moved forward because “the Israelis are not ready, and the Palestinians are not ready, and the Arab States are not ready, and the right-wing Jewish community is not ready.”
And what would make them ready? “For them to change their minds and to realize that without peace and an agreement there’ll never be security. Without peace there is no security. And they’ll continue with the terrorist attacks, with the shooting over the border, with the further building of the high walls to keep the Palestinians out and to keep the Israelis in. And eventually demography will take over, and Jews will be a minority in their own country and then maybe a one-state solution. I don’t advocate for that; I’m a Zionist. But it certainly seems to be trending that way.”
She is concerned about “an implied censorship among American Jews. It’s quite startling. They can talk about gay issues. They can talk about smoking pot. They can’t talk about the peace process.”
What needs to happen?

“Open up the gate to honest discussion. There is nothing holy about either the Israelis or the Palestinians. They are people like us, and we can talk about them.”

“I’ve been in this all my life since I was a teenage girl, and I’m a very old lady now. I’m 97. I just am tired. But I sort of keep on for what I believed when I was a young girl: that the Israelis deserve a country and they’ve got it, and I hope to hell they keep it.”
Sara Ehrman was born on April 24, 1919 on Staten Island, in New York City. She was raised in a left-wing, secular Jewish family where her only connection to Zionism was a “blue box” for Palestine into which her father would regularly drop coins. On her own, she began her lifelong involvement with Labor Zionism as a teenager.
Ehrman was involved in both American and Israel-related politics over many years. In the early 1960s, she worked at the Reform Movement’s Religious Action Center. Then, in 1965 she began working as Legislative Assistant to Senator Joseph S. Clark, Jr (D-PA). Following Senator Clark’s defeat in 1968, she worked for Senator George McGovern (D-SD) and became Deputy Director of Issues and Research or his 1972 presidential campaign.
The campaign sent a young lawyer named Hillary Rodham to Ehrman to help her investigate legal and ethical issues. They remained in contact and a year and a half later Rodham came to live with Ehrman in D.C. for nearly a year while she worked on the Watergate investigation. Ehrman then drove Rodham to Arkansas to marry Bill Clinton.
“We’ve been sort of girlfriends ever since.”
From 1980 to 1985, Ehrman worked for the American Israel Public Committee (AIPAC), rising to become the National Political Director. She brought to AIPAC the political grassroots organizing skills she had learned in non-Israel- related organizing.

In 1979, Ehrman met the leadership of Shalom Achshav (Peace Now) in Israel and collaborated with Mark Rosenblum to found Americans for Peace Now (APN) in 1981. Ehrman continued as a volunteer board member with the group. In 1997, APN recognized her work with the Yitzhak Rabin Peace Award.

In 1985, Ehrman took a job with the Texas Department of Agriculture, where she became the Founder/Director of the Texas-Israel Exchange Program, “a demonstration agricultural farm in Laredo, Texas that had an Israeli farm manager and a demonstration project on drip irrigation which was Israeli.”
Ehrman then served as Deputy Political Director for the Clinton for President campaign in 1992 and was a member of the Clinton/Gore Transition team in 1993. She then became deputy Political Director of the Democratic National Committee.
After Clinton was reelected, Ehrman opted to combine her politics with her love for Israel as Senior Policy Advisor with the S. Daniel Abraham Center for Middle East Peace, where she remained until shortly before her death. She also served on the first advisory board of J Street. Read about more about Ehrman’s multifaceted life story in obituaries in The Forward, Washington Post, and The New York Times.